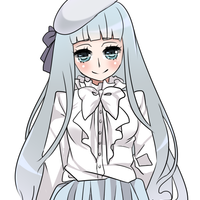 An ancient, outdated story about Seraye having a run-in with Spades back when he was a horrible person. 2009 vintage!

Everything was in perfect alignment. Every doll was in its place, every shelf was perfectly straight. Pleased with myself, I returned to my desk up front, and began straightening the scattered papers on top. Most of them were old pages that I had to remove from the clipboard in order to make room for new purchases, but regardless of their age, I could never find the heart to throw them away. After I finished that, I glanced over at the clock, which hung above the entrance. Exactly 6:00 AM, which means I had exactly one hour until the shop opened. Until then, I’d have to deal with boredom. I leaned back in that amazing swivel chair of mine and absentmindedly gazed at the ceiling, sighing deeply.

My oh-so-exciting hobby was interrupted by the familiar sound of the door opening. Did I forget to lock it again? I’d been pretty forgetful lately, so it wouldn’t be a surprise. I stood up and turned to face the door, prepared to politely tell whoever was there to leave until the shop opened. I wasn’t prepared, however, for who was standing in the doorway. It was a man, but not just any man, it was the man who I least desired to see. Not just at this moment, not just on this day, but at any place at any time.

“On the contrary, I don’t think it’s been long enough.” I calmly stepped in front of the counter, making no further movement as he moved in closer.

“What do I always want?” To rip my soul out from my lifeless corpse, of course. But there was a problem here.

“If you haven’t noticed, I’m not dead, and I’m not on the verge of death, either. So you’re out of luck today, sorry.” I turned away, looking at the shelves of dolls behind me. One of the dolls had annoyingly gotten out of place again, a problem which I fixed with ease. As I turned back, I suddenly noticed that there was a knife rushing towards my throat. Fantastic.

Not having the time to do anything else, I brushed away common sense once more and quickly attempted to grab the knife with my left hand. My attempt was a success, which was bittersweet considering that I had grabbed it by the blade. Blood began leaking out of the palm of my hand as I resisted the urge to cry out in pain.

“I’m not feeling particularly patient today. Let’s just end this here and now, shall we?” I attempted to wrench the knife out of his grip with my other hand, but he grabbed my spare hand with his own before I had the chance. He pushed me back into the shelves I had been examining just moments before; misaligning it with the others and knocking over several dolls in the process. The knife further embedded itself in my skin. A stray tear found its way down my face, which he brushed away gently.

“You look so pathetic. Ten years of this and you’re still clinging to life, when your problem could be solved so quickly, so easily.”

“We need you, Seraye. And no matter how much you deny it, you need Us.”

“Shut up.” I repeated, shaking my head.

“And you know that you’ll have to acknowledge that fact very, very soon.” With that, he pulled himself closer to me, the knife getting closer and closer to my throat by the second. I could no longer push the knife back unless, of course, I wanted my hand sliced in half. My eyes involuntarily darted towards the clock. 6:15 AM. There wasn’t any way I could keep this up for 45 minutes. Not even the slightest possibility. Deciding that it was my only other option, I reluctantly closed my eyes and fell silent. Quickly figuring out what I was up to; he backed off of me and watched closely. It would have been the perfect time to run, but I wasn’t really capable of stopping what I had started.

Standing up and swaying a bit, shaken from my sudden transformation, I looked down, not sure if I should focus on the fact that I had placed my doll on one of the higher shelves or the fact that I was now said doll. I decided that the former was more deserving of my concern, considering that I had intentionally turned myself into a doll in an act of self-defense (dolls can’t really be killed). My thoughts only lasted a split second; I found myself being grabbed almost instantly.

“Haven’t we gone through this before?” That was true to an extent…our previous meeting involved a similar situation. I made no response. He didn’t seem particularly bothered with my lack of cooperation, and walked back towards the front. Growing increasingly concerned, I finally decided to speak up.

“You aren’t permitted to take me out of this building unless I’m dead.”

“I’m entirely aware of that.” Reaching the front; he placed me near the edge of my desk. I stood up immediately, curious as to what he was up to. Resting a hand on the desk, looming before me, he stared me down. Intensely.

“Now…what can we do with you today?” A chill ran down my spine, but I tried my hardest to not show it. Once again I had the urge to check the time, to see how much longer I’d have to deal with this, but I found myself unable to turn away…unable to even look away. Noticing and enjoying the look of intimidation on my face, he circled the desk.

“I certainly can’t just leave, not so suddenly like this. It has to be more…fun than that.” The second I heard the word ‘fun’ was the second that I had the urge to make a break for it. But…I knew better than that. There was nowhere to go, and regardless of where I went, no matter the distance, he’d just find me again. Over and over again, just like he had for the past ten years. So, I did nothing, and waited anxiously. He soon stopped where he was originally standing, looking down at something. Judging by the look on his face, it didn’t mean anything good. For me, anyways. I forced myself to look down, my heart (assuming I even had one) throbbing the moment I realized what he was looking at.

Along the back of the desk, there were several drawers. I kept all sorts of things in them…books, sewing materials, notepads, papers, sometimes a doll reserved by a customer far away…it was kind of like the back room, but more organized. One particular drawer I never really found any use for, so I always just left a lock on it. Said drawer happened to be what he was looking at. I looked back up at him and took a step back, knowing exactly what he was intending to do. He picked me up immediately, staring directly at me as he slid open a smaller drawer on top. Due to it being so small, I only used it to store things like pens, paperclips, and other random little objects…like keys. There were actually quite a few of them, and I forgot what most of them were even used for. All I knew was that one of them was going to help him open that drawer, which was the last thing I wanted at this point. Picking a random key, he went down on his knees and attempted to unlock the drawer.

“Let’s see if this one fits, hm?” I had no other choice but to watch, trembling all the while. The first one failed, but I didn’t find it reassuring. We both knew very well that he knew which key was the right one, but the longer he stalled, the more anxious I became, which was precisely what he wanted. The second one failed as well. It felt like eternity had passed before I finally heard that fateful noise.

Terrified, I watched him slide the drawer open. Before I could make any kind of reaction, I found myself tossed inside; the drawer closing as fast as humanly possible. Struggling to find the front of the pitch-black world I had been thrust into, I stumbled over and over. Upon finding it, I rammed myself into it, clinging to the far too optimistic hope that it would open, just slightly. My attempt was in vain, and as I pressed myself against the wall as if it were a glass window, I heard that horrible noise again.

I sank to my knees. The words ‘let me out, let me out’ passed through my lips, but no voice accompanied them. The sound of his footsteps heading towards the back room was all I could hear. He returned, taking something out of the top drawer, writing something down, placing it back in, and finally closing it. I heard his voice one last time.

“Now, you just stay there until I get back, all right?”

Not able to think of anything further to say, I remained silent. He soon walked off, exiting the shop, the door closing behind him with a familiar sound.

I inhaled deeply, shakily, that sound etching itself in my mind. Haunting me, mocking me.

I closed my eyes and waited endlessly.