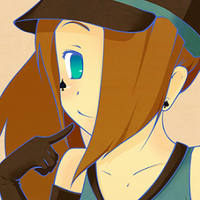 A brief, unfinished story from 2010 about Fray meeting some Chillies. It's not canon, but, ya know... completionism.

It was an ordinary day, but you probably guessed that. After all, that’s how most of these silly stories begin.

Fray was innocently walking along the sidewalk on her way home from school, as she usually did during spring. During fall and winter she would usually just end up on the bus, but she was never a big fan of public transportation. After all, 13-year-olds and buses full of creepy strangers don’t exactly mix.

To add on, there was something she liked about this path home. Six years ago on Halloween, a funny thing happened while she was walking along this very same path. Everyone vanished and she recalled meeting two strange people…the memories were blurred now, but she was sure that one was a fellow in a longcoat and the other was a woman wearing some kind of witch’s outfit. It must’ve been a dream; after the woman whisked said longcoat guy away, Fray woke up and repeated the day without the strange encounter. Still, even though the evidence was stacked against her, she prayed that it wasn’t just a dream. It was the only magical, fantastic thing that had ever happened in her life and she wasn’t quite ready to let it go. Maybe, just maybe, something else strange would happen if she just kept walking along the same path. Maybe they’d find her again, and maybe she’d get taken away, too. She didn’t care where they went so long it was somewhere above this closed box people called ‘reality’.

Oh, dear Fray, if only she knew. It would be a while before she got her turn, but something else interesting was about to happen today. It started with the voices; she could hear squeaky little voices coming from behind a nearby house. Against common sense she investigated; after all, no one appeared to be home. Much to her surprise, Fray saw a cluster of chinchillas with little halos and wings talking about hiding from someone.

“I don’t know, man. Seems pretty risky.” One of the chinchillas spoke.

“Don’t be so pessimistic! It’s now or never!” another boomed. Its voice was loud and booming, as if it announced things loudly for a living.

“Probably never, yo. We all know that Arella wouldn’t hesitate to rip our faces off and feed them to poor children.” Yet another chinchilla replied.

“Yeah. I like poor kids and everything, but I also like my face. And living. And my soul.” The first one spoke.

“Well, fine! I suppose I’ll have to flee on my own! You’ll regret this, someday!” the loud one pointed at them with a shaky paw. Fray continued to silently stare at these strange creatures; she wasn’t sure if her silence was caused by the desire to eavesdrop or absolute shock. Unfortunately, since she never bothered to hide herself, one of the quieter chinchillas noticed her and jumped back.

“G-G-G-Guys!” it whispered loudly (however that works out). “Guys!” None of the others paid attention; they were too busy arguing amongst themselves. A normal person probably would’ve used this time to run off (then again, these guys weren’t particularly threatening), but Fray was rather atypical.

“GUYS! There’s a person here! Like, someone who can see us!” it shouted, pointing to Fray. Finally the others turned around and stared as well, eyes wide in amazement.

“No way…she’s gotta be a Tested, then.” A chinchilla walked over and glanced up at Fray, rubbing its chin with a paw as if it was in deep thought. Not quite sure what to think of this, Fray just blinked and waited for something to happen.

“Hey, you. Show me the back of your right hand.” It demanded. Absentmindedly, she turned her hand over.

“But she sees us! That means she has to be Real, and all Real people in the Test Reality are Tested!” one of them pointed out. “Maybe she just hasn’t been…what’s the word…‘awakened’ yet!”

“I suppose…” the chinchilla who questioned Fray walked back over to the group.