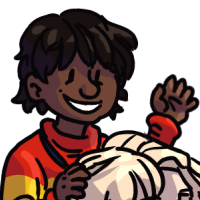 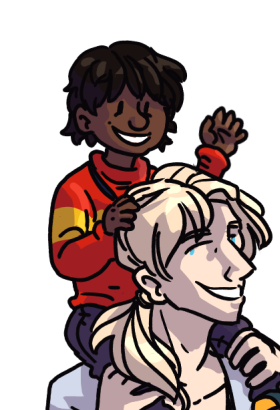 The kid. More trouble than he looks. 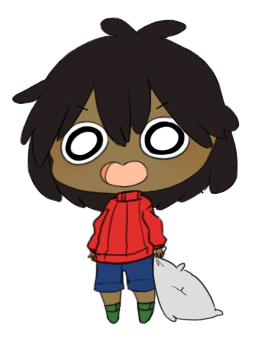 The little son of Anirudh, whose boyfriend Nash has suddenly been thrust into being the sole caretaker for. Otter is a typical three-year-old kid, full of energy and a handful for his "dad" to keep up with-- though Otter, of course, doesn't understand how little Nash knows what he's doing and how afraid he is he's going to fail at parenting, nor does he grasp how chaotic his short life his been. Otter loves beetles, trucks, dinosaurs, and space. He's always getting into things he shouldn't, wants everyone to be his friend, and he'll believe anything you tell him.

He loves any kind of food you can cook over a campfire, like Jiffy Pop or marshmallows, and even though they're living in cities now, Nash will still use the stove as a make-believe campfire and let Otter sleep in a blanket tent when he wants to. Otter's prized possessions are a snowglobe and a star pendant.

Otter's round little face is framed by chin-length fluffy, black hair. He typically has wide, excited eyes and an even wider smile.

He's dressed like any 3-year-old, in bright primary colors and patterns, and Velcro shoes. If you're drawing him, you can have fun putting him in anything you think suits him-- he'd love anything involving dinosaurs, space, and similar litle-kid interests.

It's not necessary to draw him with the star pendant, but it's a black, round-edged star, flat and shiny, tied on a blue ribbon.