The carnival barker. A lion of a man. 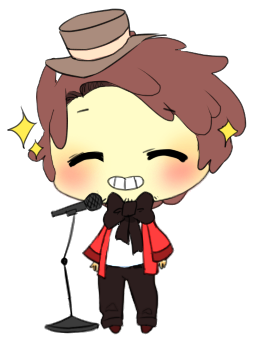 With a booming voice and a roar of a laugh, Charlie's impossible to miss. He works as the primary outside talker (carnival barker) for the freak show, and he can always be found patrolling his beat in front of the storefront, inviting passersby in for a show.

He's friendly as hell, magnetic with children, and warm and charming enough to convince nearly anyone to spend their $10 on the greatest show your eyes will ever be lucky enough to witness.

He adores the other performers like his family, and would do anything for them. Although he's basically a big teddy bear, he's loud and a big guy, so when needed he'll intimidate anyone who's hassling one of them.

And of course, he adores his actual family-- his longtime boyfriend Derrick, and their assortment of beloved pets. Charlie and Derrick hope to get married someday, when it's legal in New York.

Charlie is big and charming, with wavy brown hair, green eyes, and a full beard surrounding his friendly grin.

At work he dresses like the classic carnival barker, but he's a dapper guy even outside the job.