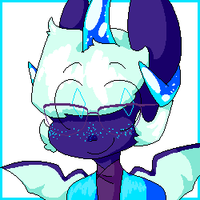 The glittering diamond structure, ruler of three thousand Timelines, whose conceptual wavelengths resonate with wealth, power, and glory. For all the pomp around his titles, no one expects Dij to be a dirty-mouthed flirt with a possessive streak. But that he is, equal parts regally perched in a royal throne and rapidfire innuendo.

Fundamentally alone, Dij feels separated from the rest of the world - bored by everyone else's obsessions with mundane matters and groupthink. He champions individuality, taking ownership of Timelines to try to push mortals into becoming 'real', fully-fledged, self-sufficient individuals. But he can't shake the fact that he prefers subservience, that he's drawn towards those who would bend their knee to him, and oscillates between seeking these extremes.

Most of his life has been spent emotionally disconnected from others, seeing them as imperfect and in need of repair. It was only after being rejected by his childhood crush, Pyatiugolnik, and rebounding with Kolo that something's finally clicked, that maybe he's not right about everything, that there's some beauty in the imperfections he saw before.

Keeping constant watch on himself is exhausting. Being wrong... is exhausting. Admitting fault... okay, maybe not. But if he's going to get 'better' for anyone, by the stars, it'll be Kolo.

Songs: Water Curses / Did You See the Words / Ghost of Books / Creepin' up the Backstairs
Concepts: Emperor / delphinium / beta / to preserve self
Zodiac: Leo / Scorpio / Leo