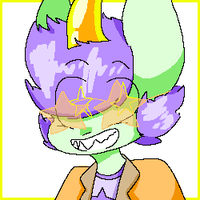 As the integral star structure, Zvezda is the living embodiment of stars and all related imagery, memetics, and concepts. Stars exist because Zvezda exists, and he is an overpowered reality warper due to this.

Hyper-cheerful and upbeat, he serves as a constant bright source of fun and entertainment for the others. With little self-identity, Zvez can mold himself into whatever his friends most want at the time, all without breaking a sweat! And he loves to help!!!

In reality, he was emotionally stunted by the other Mags purposefully not introducing Zvezda to any concepts that would potentially harm his idealism or energy. Though Zvez objectively understands things like death, war, killing, etc. exist, he's under the impression they're easily solved after defeating the "bad guys".

He resists attempts to mold him into a more "well-rounded" person. He's happier this way, helping others and being their favorite emotional pick-me-up. So what if he doesn't understand the way the world really works? >:(

Primary ThemeIf U C My Enemies

Things roll off him like water on a duck's back. Zvezda is a man of intense emotions, but he's blessed with the fact that most are fleeting - save for his limitless, boundless energy, of course. He's always ready to make new friends, take them on a wild adventure, and be home before dinnertime!!

Some would say he's obnoxious and annoying, but that's not true at all! The other Mags love him, and Zvezda is VERY confident in knowing that! Even Kolo and Rendgen aren't mean to him - they just smile and let him bring them gifts and hang out. How could they be mean, when he's just so lovable and cute?

Most of his days are spent hanging out with one of his friends, often trying to create them personalized gifts or provide much-desired support. Zvez has a strong personality and a powerful presence, but he so rarely takes the wheel when it comes to decision-making that he meshes well with just about any other Mag. He's not a doormat nor submissive - he just finds ultimate joy in being around others and indulging in whatever makes them happy, and throws 110% of his energy into feeding others' egos and happiness.

In a nutshell, he's an enabler, and can conversely bring out the worst in others. Zvez is unlikely to ever disagree with a proposition or an idea, and often ends up ramping up the stakes and drama more just by being a magnet of excitement and zest. Most of the time, he can only be tolerated in small bursts - being around Zvezda too long is liable to lead to burnout and exhaustion, so he cycles through the Mags periodically, giving his friends time to cool off before he rolls back into their life and they nearly blow up a Timeline again.

His loyalty is difficult to earn, but is deep-rooted and well-cemented. Zvezda has a vested distrust in strangers, but is willing to at least make their acquaintance and is typically polite towards them. The second he perceives danger or insult towards his real friends, however, the fangs come out and Zvez will often attempt to violently neutralize the threat. His hatred is just as lifelong as his love, and Zvez does not typically change his opinion on people after deciding they fall into a bracket of "good, friend" or "bad, enemy".

Despite his troubles with grappling with high philosophy and critical thinking, Zvezda is emotionally intelligent and highly attuned to the feelings of the people around him. He instantly knows if someone's not feeling well, is an eerily-accurate lie detector, and can give detailed breakdowns of all of his friends' personalities, motivations, and aspirations. He doesn't pick up on these things consciously - understanding others comes easily and naturally to Zvezda. He wouldn't be able to explain how he knows any of these things, and certainly is incapable of enough introspection to know himself as well.

Which is fine, because he probably wouldn't want to know himself that well, anyways.

Zvezda had always been cheerful, upbeat, and a little bonkers, but he'd had some sense on his shoulders and a keen eye for emotional perception. He showed good skill in perhaps therapy or life coaching, especially once he would eventually calm down and mature with time. He wouldn't stay a hyperactive child forever - nobody could, really.

But... hyperactive children are fun. Hyperactive children are always a handful, always energetic, and always a source of comfort, love, and babying, without all the trappings of adult relationships like "we need to talk about you blowing up that Timeline" and "no, you can't just take over the world like that, you asshole". Children don't ask pointed questions that lead to guilty introspection, regret, and having to walk back on bad decisions previously made in gusto. Children don't make anyone admit they were wrong.

But Zvezda was one of them, one of the Mags. And he was childlike enough at the start that maybe, if they just... encouraged him to stay that way, to not develop, to not grow or inspect his own actions....

Zvezda was coddled from birth and continually into the future as the Mags' designated 'baby', never facing repercussions for his actions and shielded from the reality of most situations. He never saw how awful the world could get - he was never allowed to experience anything that would help him mature or grow up. Everything was sparkles and rainbows, all the time, to Zvez. Nothing bad happened that the other Mags (mostly Kolo) couldn't fix. No suffering was permanent.

This, coupled with Zvezda's natural idealism and love for creation, arched into his modern personality. He's incredibly loving and genuine - he's no brat by any means and is completely selfless, but has a deep misunderstanding of how the world functions and truly believes in an extreme black-and-white morality. People who hurt others are always bad, no matter what - that was what stayed true through all of his upbringing. Therefore, he'll protect the good guys - his friends - with all of his magic and zeal, because that was how heroes operated, and they were definitely heroes!

Zvezda is completely unaware of how he was manipulated, and most of the Mags weren't even aware of their conscious tinkering. It was just an unspoken rule to never tell Zvezda about things like Bereave, or where Jubilee came from, or about anything irreparably negative or broken. He was just too pure and cute for that, probably. He wouldn't handle it. Who wanted to be responsible for breaking the adorable Zvezda that they all emotionally depended on for happiness and excitement in their lives?

In recent years, the full breadth of what they'd done (or failed to do) has come to the attention to the Mags' top leaders, Kolo and Pya, when it came time to answer Zvezda's question of where Trougao had been and why he seemed so different. Taking an "honesty is the best policy but only if you ask first" method, Kolo attempted to explain Trou's history with the torture and machine he'd been placed into, only to find that Zvezda was struggling to comprehend why the trauma would stick so hard and why wasn't Trou better already?

In quiet horror, he realized what they'd done (and what he'd helped contribute to) and vowed to be the one to take on the brunt of helping Zvezda mature. It's just... slow goings. Kolo didn't want to break Zvez's heart, but showing him even minor negative things didn't seem to achieve the right effect. He started to realize that he genuinely had no idea how to go about helping Zvezda become a fully-realized, fully-rounded person, and turned to Zehneck for assistance.

The latter didn't have any bright ideas, either, but he was willing to try to help speed along the process by also taking Zvezda out for "walks" in more backwater Timelines, just letting Zvez experience more of the world. Zvezda thinks these walks are fantastic bonding activities and seems incapable of removing the rose-tinted glasses.

Incapable, or he just doesn't want to. He's not completely stupid; he understands on some level that things are fucked up and sparkles and glitter can't solve all of the problems. But he just can't grapple with that on any outward emotional levels, and is perfectly happy staying as the ignorant, blissful emotional trampoline for the others.

Plus he loves them!! And he loves you!! Very much!!

I'm going to the beach today!! I'm gonna get lots of starfish and really cute fishies and put them in my fishtank!! Does anyone want pictures once I'm back??

I took lots of pictures of the night sky and made like three new constellations!!! They're really pretty and cute I hope people like them!! :>