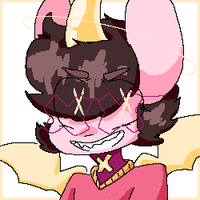 As the integral X structure, Rendgen is the living embodiment of Xs and all related imagery, memetics, and concepts. Xs exist because Rendgen exists, and he is an overpowered reality warper due to this.

He's determined yet short-sighted, constantly losing focus and averting his attention to something else. His eager, boundless energy would make him a formidable Mag... but due to his lack of attention span, Ren spends more time playing catch-up than plotting things.

Although he can come off as malicious, Ren doesn't really mean people harm. He enjoys teasing and pushing people's buttons, sure, and often can't see how hard he's pushing others, but intentional cruelty is far from his modus operandi.

Once upon a time, he had left the Mags and had become the leader of the Shards, a COR-shootoff that was determined to "bring around the end of the world" (albeit poorly-explained, both in reasoning and methods), Ren has retired to join the other Mags again.

Recent events (aka the return of his favorite person, Jubilee) have re-sparked his interest.

Rendgen is many things, but focused is not one of them. Full of grand ideas and picturesque concepts, the only thing stopping Ren from being an unstoppable force of change is the rest of the world's inability to keep his attention. Everything is so pretty when he first turns his scrutinizing gaze to it, but the luster fades so quickly, and Ren finds himself chasing the next shiny object, looking for meaning and purpose in the journey.

He would, in fact, be a viable threat to the existence of the world, if he were not marred by such a focus issue. Still, despite his lack of goals and direction, Ren is still a force to be reckoned with - for when he can take note of something, his determination to burn it to the ground is nearly unmatched. Unfazed by other people's opinions of him and fiercely independent, Ren was at odds with a subordinate position with the other Mag Frags, and promptly left after wasting 'too much time' abiding by Pyatiugolnik and Kolo's directions.

But really, how could anyone blame him? The entire world sat waiting for him, an oyster ripe for the picking. He was an incredibly powerful deity, with magic and dedication beyond the comprehension of mortals. With a flick of his wrist, he could rearrange the stars themselves, twist time undone, and reverse the lives of every individual he came into contact with. The only limit was his imagination, and he had plenty of that.

And yet, the other Mags seemed to starkly lack any. They droned on and on about responsibility, the weight of the world, protecting the Timelines. But why? They didn't make the Timelines. Who was to say that their duty was to tend to the Timelines, when it seemed far more obvious that the world was their plaything? They were the most powerful entities left in the entire world. It was theirs to do with as they pleased.

Ren wandered Timelines, doing exactly that - taking what he wanted, bending what bored him, and indulging in whatever tickled his fancies at the moment. He found a temporary kindred spirit in Dijamant, who seemed to understand: taking over Timelines and arranging them by his verdict. And yet, there was still a stark difference - Dij claimed he was trying to help, trying to protect, that mortals were just too bad at living on their own. And Rend knew he was alone once more.

It wasn't until he witnessed the death - birth? - of a Timeline that the reality of existence came crashing down on Ren's shoulders. The supernova of destruction and creation alike struck deep into him, rattling him down to his very core. In the face of power magnitudes stronger than even himself, in the face of the uncaring march of life and death - for the first time, he felt fear.

Jubilee came soon after, young and naive. Ren shooed the younger Frag under his wing, keeping careful watch over him. Should he tell the other Mags what had happened? Would they even take him seriously anymore? Were they going to reveal themselves to the other Fragments? There was so much world out there, and so many questions, and Rend couldn't shake the creeping sensation of incompetence that clouded him.

He felt like a child. A stupid, dumb child, who the other Mags probably joked about behind his back, and made fun of him, and - and -

He clung to Jubilee, his only confidant, his only friend. In an act of lonely desperation, he gave the first Blessing - imbuing Jubilee with a massive piece of himself, creating a link between them forever that would solidify their connection and relationship. The other Mags accepted this with wary confusion; Ren had never seemed the type to care so much about mortals - but maybe it made sense, considering who Jubilee was.

Still, it wasn't enough. Rendgen violently struck out again, leaving the Mags after Dijamant gave up the Timelines he'd taken control of and was accepted back into their fold. He'd show them. He didn't have to listen to their status quo. He'd make his own - fuck the Coalition, fuck the other Frags. Ren formed the Shards, a group of Fragments determined to bring about the end of times. Now he was a leader, and now people had to listen to him. He wasn't a bumbling idiot anymore. He was a threat.

And yet, still, something about the way Jubilee looked at him still shook him to his core, made him question everything he'd done. But to do that would to be admitting that everything Ren's life had culminated in was a lie, a farce, a mistake that he'd held onto for eternity. And the mere thought of that is enough to send a shiver down his spine.

✖ STOP! ✖
Coalition lackeys are NOT ALLOWED!!! Do NOT message me or post on my wall!!