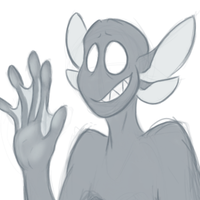 his people were conquered and corrupted for use as weapons and he personally was forced to fight manny and his team, killing most of them

he managed to escape but was still partially corrupted, and decided to do something good for once and guard this important thing he found