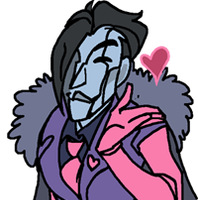 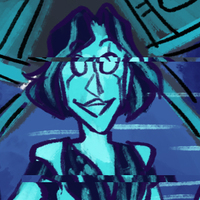 Turing is the AI that connects with all the ships of Team Starlight; pilots connect with her empathically in order to fly their ship with perfect control. She's comfortable shifting her appearance and gender to find a presentation that's easiest for her pilot to connect with, but it still requires a genuine connection with Turing as a person, and a great deal of trust on both ends.

After the previous defeat of Team Starlight, Turing has been abandoned in the Starlight base for years -- she's glitchy at first and a bit run down, but excited to see people again, perhaps a bit too chatty after her years of solitude.

She's patient with her pilots, eager to be involved, and likes connecting with people and exploring space, but she's sometimes a bit awkward socially -- confused about the emotions she picks up during a connection, or unsure where the line is between private and public expression. As an AI, her understanding of organic relationships is a bit alien -- but she recognises them and knows how powerful and important they are. She welcomes any sort of close connection from her pilots -- friendship, familial, or romantic.