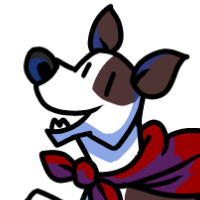 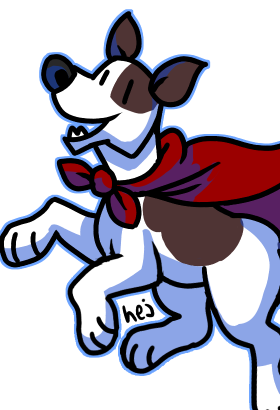 Waffledog is a superhero Jack Russell I created in middle school. He was the inspiration for a collaborative project with my friends where we designed 100 breakfast dogs (we later tried to expand into dinner cats and lunch rabbits, but alas, it's hard to think of that many different kinds of foods after a while).

Anyway, he technically exists within Catband's canon, because he is the cartoon mascot of a chain breakfast restaurant in the comic (think IHOP) called Waffle Warehouse (thx circlejourney for the name). The restaurant is "rivals" with a fast food fish restaurant (think Long John Silver's) named Salmon Depot, whose mascot is the superhero fish, Salmonman.