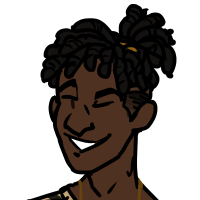 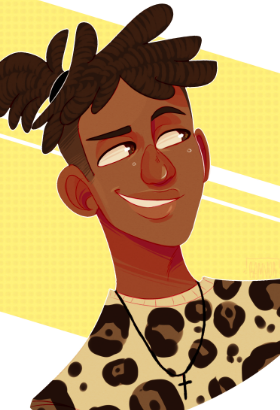 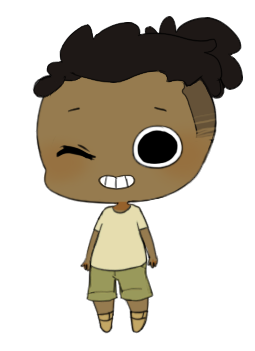 "But I could. I've got precision."

Crane, as his best friend Mephisto has nicknamed him, is a "freak" in the Coney Island boardwalk game "Shoot the Freak", which is to say he spends his summer getting paid to run around an overgrown lot with a trash can lid for a shield, getting pelted with paintballs by customers above. It's a job.

A Coney Island native who lives in the nearby projects with his mom, he spends most of his free time lounging around the arcades with Mephisto. He's too good at the games, really, and he earned his nickname because the crane machine is his special forte and his addiction. He's loved by neighborhood kids since he gives most of what he catches away, but he still has a mountain of stuffed animals in his bedroom anyway, and he's extremely proud of all his conquests. His mom isn't thrilled about how he spends his time or money, but she's glad he's at least not in a gang or anything.

He's a Good Boy who loves his mom and Jesus, but he doesn't think things through too well, and he's full of bad ideas. He's the sort of guy who daydreams about overthrowing the government-- alas, if only he weren't so lazy. His mother doesn't trust Mephisto at all, and hey, she's probably right not to. If Mephisto is the match, Crane is the tinder, and it's hard to imagine that combination will keep out of trouble for long...

Crane is tall, friendly and eager, with short dreads above the close-cropped sides of his head. He has the peculiar lanky build of a skinny guy with a tummy.

He likes leopard print, and he's usually wearing a t-shirt, shorts, and cool sneakers (when he's not on the job). He's typically wearing bike gloves and a band of quarters on his left bicep when they go to the arcades, and he's always wearing a cross necklace. He has tattoos with names of beloved family members and religious images on his arms.