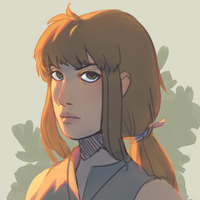 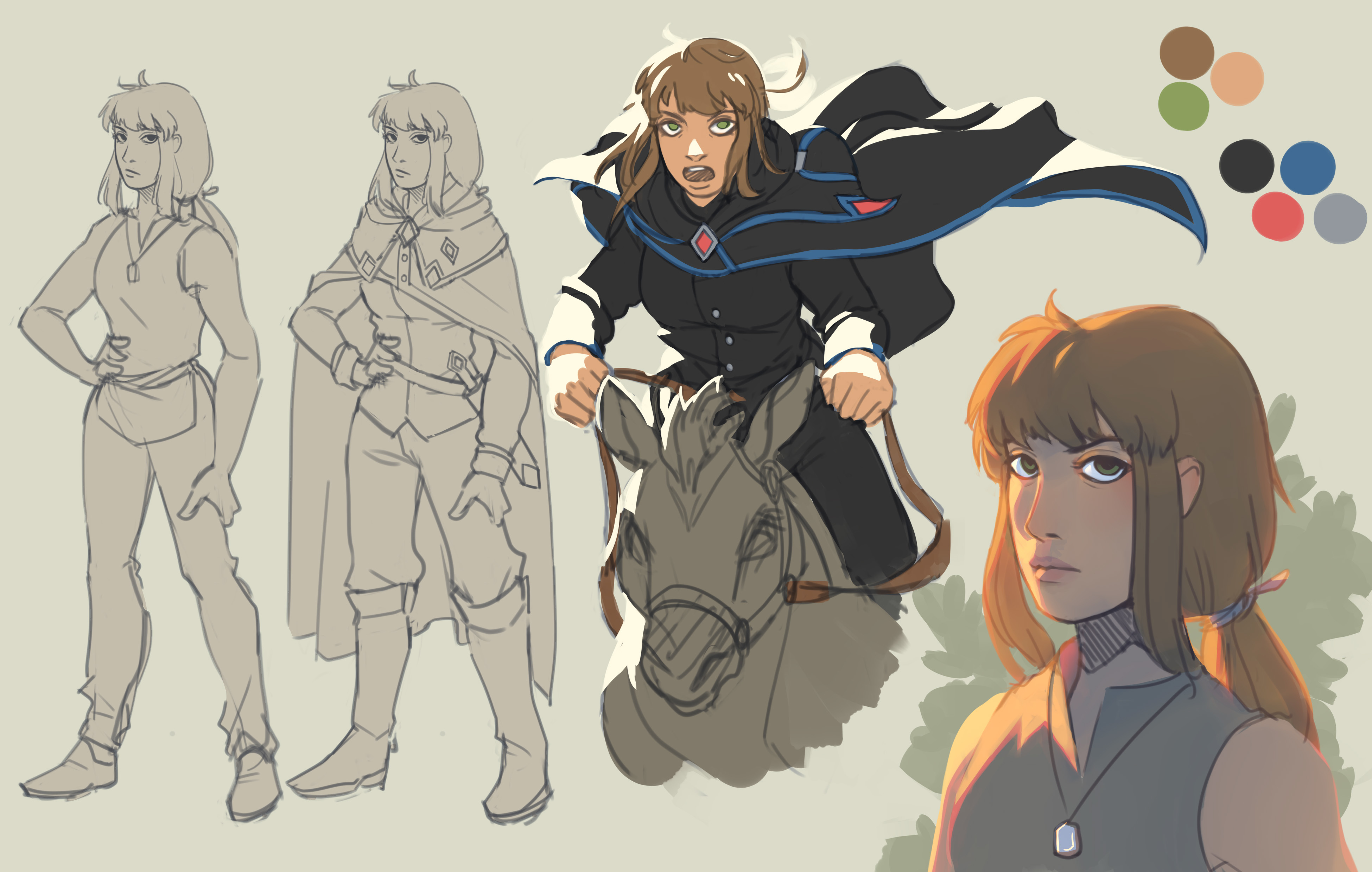 A character from my ongoing web novel, Revolving Door!
I held a Twitter poll for whom I should post next, and she co-won.
Personality

Thistle is keen and severe as a whetted dagger blade. Nothing misses her eye: no error, no lie, no detail awry. Her sharpness and intuition for danger have saved many a scout from sure death—and she makes sure that none of them ever live it down. Not even the most inconspicuous cut corner will escape her, and nothing will soften her reaction to it.

Thistle holds two things above all others in her life: her unit, the Right Vanguard, and her spouse Apra. Within the Vanguard, she takes on her role of second-in-command with iron-clad stoic. Working relationships demand a formal etiquette that cannot simply be cast aside; her personal business is not the business of anyone in the unit, and is best never spoken of in their presence. Colleagues, or so she thinks, cannot be friends.

For as long as she has been a member of the Ducal Scouts, Thistle has had ambitions of commanding a scout unit, and much of what she has done during her service of ten years, has come with the not-so-secret motive of bolstering her upward advance. To most, Thistle appears sure-footed, fussy and strict, even overbearingly so. Many of her colleagues admire her, but none can claim to love her or even be terribly attached to her presence (especially when the first-in-command is ten times the social butterfly).

Really, she just doesn't allow anyone to be privy to her insecurities and troubles. She has not seen her partner in more than a year, and her heart breaks every day she spends out in the Third World forests. But as much as she wishes their missions were shorter and that she got to go home more than once a year, she refuses to skive on her job—it wouldn't be fair. She mourns in her tent before she closes her eyes to sleep, and then by dawn she becomes a commander once more.

Thistle entered the Ducal Scouts at the age of twenty, fresh out of her life as a chalk harvester of the White Cliff, where a sudden decline in demand had wrung the life out of their business.

Her instinct for traversing precarious places served her well in her classes: she performed so well that she was awarded a warrant to become a commander almost as soon as she graduated training, which naturally whetted her appetite for commandeering. Her first assignment was with the Left Vanguard, escorting a team of researchers through the western zones of the Third World. It was there that Thistle became familiar with their team's resident botanist, Apra, and eventually, despite all her efforts at keeping their relationship businesslike, became romantically involved with them.

When the assignment ended, Thistle resigned from her position so that she could go home and get married to Apra. With it she forefeited her warrant and her chances of ever receiving another. They lived together in Apra's town on the outskirts of the Duchy for a year, but as more of the Third World was discovered and Apra was inevitably summoned by the Duchess to rejoin the force, Thistle found herself alone and restless.

She, too, soon returned to the Ducal Scouts, but this time without the good graces she had enjoyed the first time. Holding still onto her ambition of becoming a commander, she went into her job with more fervour than before. But she was soon to encounter a stubborn roadblock to her advance: a superior more dedicated than she, who would never contemplate leaving her position—thereby transferring it to Thistle—of her own accord.