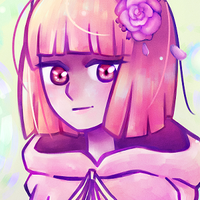 Being insulted, not being allowed to do something, men (generally), getting dirty, debates, the Internet, harsh music, papercuts, spicy food, metallic things, people who take advantage of others, ruining her clothes, scratchy fabrics.

Euanthe is sweet, gentle, humble, and demure. Like any good healer, she's loving and nurturing and wouldn't hurt a fly - and if she did on accident, she'd heal it immediately while apologizing through her tears. She's eager to help and loves to please, making her a reliable healer for any band of adventurers.

The truth is that Euanthe is cold, bitter, and merciless. When she drops her front, she speaks darkly and with a sort of nonchalance that's almost smug. She manipulates people into trusting her and then leaves them to die, stealing their possessions and going about her merry way. She feels little empathy toward others due to having little empathy shown toward her and as such has decided to only care about herself. Even if others act friendly, she figures it's all fake and dedicated to lure her in so she can be used and thrown away - something she's decided to use against everyone who looks at her. She's cynical, paranoid, glorifying of the nightmarish, power hungry, and has both a sadistic and masochistic streak.

Euanthe dislikes opening up, dismissing any conversation topic that requires her to voice an opinion and becoming highly hostile toward anyone who tries to pressure her into talking about personal matters. There's still a side to her that's caring and soft, but it's armored by layers of spite and as such seldom shows genuinely. Her girlfriend, Breccia, is usually the only one she'll lower her guard around. Around Breccia, Euanthe is easily flustered, a little more lighthearted, and a little less hesitant to express herself.

Euanthe isn't really a bad person deep down, and she both knows and despises this. Her kindness and willingness to put others before herself has been used against her too many times, and now she views it as weakness. She discourages herself from showing mercy or feeling grief, convinced that being cold and looking out only for herself is the only way she can succeed in life without sacrificing everything that makes her her.

Euanthe was born into the Audiveile family: a family famed for their magical power. However, said family was highly patriarchal and male-dominated, viewing the family's women as inherently weaker and mostly just useful for domestic purposes and expansion of the family. As such, her father refused to seriously acknowledge her magical potential and pushed her off to the side in favor of training her brothers instead. Despite this, her brothers frequently sought her help in their training and often paid her to do their homework for them. This extended to her schooling, where her classmates would request magical favors from her and ask to copy off of her work. It didn't take long for Euanthe to develop a complex: she felt she needed to be useful to others to mean anything, and if she dared to ask for gratitude or anything in return she was stepping out of line. She withdrew emotionally, carefully treading around the desires of others and accepting that her desires only inconvenienced others.

Even so, Euanthe still desired to become a more powerful magician and tried to convince her parents that she was good enough for it. Eventually they caved... but sent her off to an academy for healing and support magic instead of the offensive magic schooling she desired, deciding that was the only path for a proper lady. Euanthe grew bitter, angry, and untrusting, intending to flunk out of her classes just to waste her family's money and bring shame to their name. She had no passion for healing and didn't intend to sacrifice what little dignity she had left to enforce her family's backward views.

However, Euanthe's first field assignments triggered unexpected feelings. She was berated for any slip-ups and got little acknowledgement for a job well done, but she quickly understood why. It dawned upon her that she was far more important than any attacker. Whenever she was assigned to a group of adventurers, she suddenly gained control over their lives. They depended on her magic to not only succeed, but to survive. For once in her life she held power over others, and she didn't intend to let this knowledge go to waste.

After graduating, Euanthe left the country without warning and began traveling, searching for bands of adventurers who needed a healer. She would happily join them, keep up a warm and innocent front, and do her job as asked without objections. After hanging around them for a while for food, housing, money, and information about the regional culture, she would wait for the group to get into a serious fight and refuse to heal them during or afterward, leaving them to die if she didn't finish them off herself. She'd take all of their money and loot, sell what she didn't need, and continue onward, improving her gear and skills so she could run more lucrative scams. Though every once in a while someone would survive and report her, Euanthe avoided notoriety thanks to her ability to look like a kicked puppy and frame events to make her look blameless. Of course, thanks to her willingness to finish the dying off and her talent for skipping town, the deaths of the adventurers she joined were usually just blamed on the monsters who technically killed them.

One day she ran into a trio of supposed heroes: a young man named Vitrail Alkester; his fairy companion, Carisel; and a thief named Azior Blye. She offered them her services as usual, and Vitrail gleefully accepted despite the skepticism of his allies. Vitrail explained that he was on a journey to save the world from the great evil that threatened it every 1,000 years! ...And Azior was just kind of around for the money. Euanthe wasn't particularly interested in saving the world; everyone, herself included, could go die in a fire for all she cared. But it was a job.

The four traveled together for a while until they came upon the domain of a powerful half-demon named Breccia Gabbrostea. Her strength was overwhelmingly clear, but that didn't keep Vitrail and co. from preparing to challenge her. Euanthe planned to abandon them there, but... she found herself captivated by the way Breccia immediately fawned over her, flirting with her in the midst of battle like it was nothing. No one had ever really complimented her like that before or showed much interest in her - a few of the men she traveled with, maybe, with overt sexual intent - especially not another girl. A girl who was cute and dangerous and gushed over her with just a glance...

Unexpectedly flustered and distracted, Euanthe failed to ditch the others and they wound up impressing Breccia with their combined power. Breccia agreed to tag along with them to save the world, deciding she wanted to see just how big and bad the looming great evil really was. That, and she liked the idea of hanging around Carisel and Euanthe.

Euanthe decided not to ditch Vitrail's party quite yet, becoming close to Breccia very quickly and deciding that if she was going to watch people die for profit, she wanted to do so with Breccia at her side.

TBA, will update once I decide what kind of stat format I'm using! Or if I'm going to make multiple different versions?!?!

Euanthe has the stats of a typical healer class: high SP, high magical resistance, but little in the way of attack power and speed. Though she's not exactly squishy, she's definitely not meant to be on the front line.

TBA for the same reasons as above!

Being a healer, most of Euanthe's skills involve... well, healing! However, she also has a few buffing and debuffing spells in her artillery, ensuring that she has a use even when everyone is at full health.