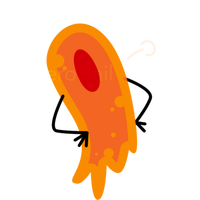 Steve is an energy being and can transfer himself via circuits.

● He can zap into people's communication devices and make text appear if the message is urgent and an elaborate game of charades isn't going to work.

● He doesn't technically have a sex but likes being referred to as a male. He also chose his own name after lurking amongst the more humanoid creatures of the planet. He loves human customs and has a fixation on older human technology.

A rounded cylinder of energy. The inner portions are more vibrant. His form somewhat resembles a flame. That red circle's not a mouth or an eye, it's his core. It can move around his body. He has two arms that come out through the depth of his form with 3 fingers on each arm.

Kali and Steve are besties! Steve was one of the first non humanoid beings that Kali met and she was fascinated with him!

Over time Steve came to really enjoy Kali's fun loving personality and all the mischief they'd get up to together.

As Steve is often around the landing bays on Base he was again, someone's first non humanoid being. This time it was Jessie. Jessie was afraid at first but Kali slowly introduced Steve into their group.

Steve worries about how nervous Jessie is and tries to keep his spirits up!

Asher and Steve get up to mischief together quite a lot. They have similar senses of humour and are both equally as dramatic as each other!