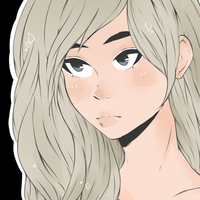 Stories with deeper meanings that don't hit you until a while after you've read them, video games, ice cream, reading, windy days, long walks on the beach, writing poetry, math, sitting on things you're not supposed to sit on, loose clothing, blanket forts, spaghetti, euphoric music, precipitation, holding people when they're upset, urban exploration, fishing, fitting herself into boxes like she's a cat.

Speedruns like nobody's business. Has an utterly fantastic memory. Impressively flexible. Has never once overcooked or undercooked a noodle.

Every time she plays a Gen 2 Pokemon game she always has a Furret on her team. It surfs like no one's business.

Angele doesn't speak much, if at all, to anyone she isn't familiar with. She'd rather not acknowledge the existences of others she doesn't have to. She's introverted and very much a lone wolf, preferring to avoid social setting whenever possible. She tends to be dismissive, deadpan, and acerbic. Needless to say, others see her as being cold and disinterested in everything. The truth is that she's fond of learning and new experiences, but she has issues emoting and has social anxiety. Despite growing up in a warm and loving family, she's inherently distrustful and unforgiving toward others. She doesn't like to get her hopes up. She'd prefer to be pleasantly surprised than disappointed.

Around people she's close to she's a little warmer, but she still doesn't really speak much until spoken to. She doesn't know how to deal with affection, so most of the time she spends with Alma is spent quietly blushing. She has a hard time letting people know she cares about them and worries that that drives people away from her.

Angele is tough and aggressive despite all of this. She's a quick problem solver, difficult to push down or discourage, and willing to do just about anything to accomplish whatever's important to her. Once she's focused in on something, it becomes extremely important to her and she won't settle until she's succeeded, often at the cost of her physical and/or mental health.

"I'm not putting up with this bullshit. Get out of my way."

Despite the mysterious air she has about her, Angele's backstory isn't anything particularly interesting or dramatic. Her mother died during childbirth, leaving her with her father and older brother. Her father remarried when she was young, adding a younger brother to the family in addition to her step-father. She gets along with her older brother fine (though they don't talk much) but her younger brother annoys her a lot. She has a step-sister, but she stays with her step-father's ex-wife. Prefers her step-father to her father but loves them both dearly. All in all it's a pretty functional family.

Outside of her family situation, she drifted through school easily. She had difficulty making friends due to her lack of desire to interact with people outside of school (if even then), though she succeeded academically. She spent most of her free time reading, particularly enthralled by books about the supernatural and magical. In middle school she started up an unofficial "paranormal investigation club", which garnered little support due to Angele being infamous for her coldness and the subject matter being seen as embarrassing by most kids her age.

However, one other student joined: a girl named Alma. Angele quickly became friends with her, pulled in by her bizarre interests and energetic attitude. They started dating in high school and decided to attend the same college together despite it being a school Angele was overqualified for. They continued seeking the strange and arcane, exploring dangerous places under the guise of urban exploration in hopes of uncovering the world's secrets. What they found was that, at the very least, magic was real. They found a few tattered spellbooks here and there and studied them furiously, practicing whatever they could. It seemed Alma's magical aptitude was much higher than Angele's, and while Angele was mostly interested in using magic for mundane acts Alma was more interested in matters of the occult. Angele attempted to dissuade Alma from summoning and getting too involved in the dark arts, but it was difficult. It was something Alma was passionate about, and Angele tried to trust that Alma could handle herself.

A month into her second year of college, Alma vanished. Distraught, Angele abandoned her studies and responsibilities to search for her. Having few options, she sought out Alma's roommate, Chalcedony, in hopes that she could help her find out what happened to her girlfriend.

She had a sickening feeling in the pit of her stomach that whatever happened, it was something she could have prevented. It was almost certainly for a magical reason... could she even stand up to something of that nature?

Angele is entirely human, but it's worth noting that she's very intelligent and capable of understanding just about anything given an explanation. She also has an excellent memory and is highly agile.

Her magical aptitude is low, but it still exists. If she can learn the words, hand gestures, and occasionally or runes, she can perform most minor acts of magic. No matter how hard she studies and practices, however, she can't make up for her unimpressive soul energy. Major acts of magic require extreme amounts of time and preparation, and even then she'd probably need assistance from someone who has a more powerful soul than her. As such, when it comes to the idea of combat she's more focused on training her body than her magic. She carries around a pocket knife wherever she goes, just in case, and knows how to improvise a weapon if need be.