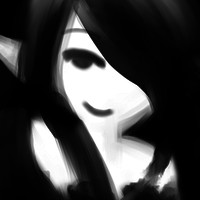 Some sort of demonically-corrupted shadow being. Also one of Them!

Souls, people, people made out of soul, fruit snacks.

To become a biologist. She has a pretty thorough and personal knowledge of biology now, so mission accomplished...??

Muri manages to be selfish and delicate at the same time. She's ominous and very open about her desire to consume others in a strangely soothing, relaxed sort of way. She's easily amused and likes to play with her food, often making it so unclear as to whether or not she's going to devour someone's soul or not that she herself forgets. She tends to be open to negotiation, whatever that entails. So long as she's satisfied one way or another, the details don't really matter to her.

Has a habit of referring to people by their last names and treating strangers as though they're familiar friends. Steeples her fingers and flutters her eyelashes often.

Once upon a time, Muri was a human. A human with a penchant for the strange and arcane, but a human nonetheless. She began selling her soul to every demon in sight, gaining power, riches, and glory while demons fought over ownership of her soul (if they even cared at all). She twisted contracts wherever she could, even outside of the endless web of connections she sat comfortable in the middle of. Something about deceiving and defying beings so much more powerful than herself gave her a thrill. She lived for it. As her number of contracts grew, so too did her power. Eventually she began making contracts with people herself; after all, she was essentially a demon herself by then.

However, the day came when she grew corrupted by her power and demonic connections. Being no fool and curious to see what the fate of her infinitely-damned soul would be, she took her own life before she could lose her inhibitions. Muri awoke in Limbo and was permitted to become one of Them. She used her Request - a wish granted upon Promotion - to free her soul of all of her contracts.

This came at a cost, however. Her soul was now starved, having previously been tied to so many other beings that it could no longer support itself. She became an inhuman mass of soul with something that vaguely resembled her human form drowning within it. The only way she could keep herself together now was by feeding off of the souls of others.

Which she thought was kind of cool, actually. She wouldn't have it any other way.

Still eager to screw over demons even in death, Muri tends to haunt Limbo's elevator to Hell and other infernal locales, preying on the souls of the damned.

Muri is made out of darkness... or at least out of some sort of dark, inky, flowing substance with the feel of blood. She can change her form to some extent (particularly her size) through careful manipulation of shadow. Said shadows actually aren't shadows, and rather are the souls she devoured sort of digested in a corrupted manner. Which makes everything about her, like, way more gross.

Muri is capable of manipulating her "shadows" and melding them with actual shadows to control them as well. She can use this ability to travel across long distances and sometimes to even teleport; she can bring others along when she does this, but in general people don't trust her enough to not devour them when she does so. Likewise, she can use this ability to defend herself and others, but again some people would rather take their chances dying than having their soul consumed. How rude!

She's one of Them - the highest beings on the Chain, essentially - so she can elevate her soul's "vibe" (which can cause headaches or corruption in lower beings) and teleport back to There whenever she pleases.

Her primary weakness is that she can't function in bright places at all. She also responds poorly to holy water if you happen to have any on you and moves more slowly in cold areas. She might leave you alone if you just burst into tears and go on about your wife and three kids, since that kind of thing spoils her appetite if you put up enough of a show. You can also keep her from eating your body and soul by just being amusing enough for her to enjoy your company, but afterward she might not leave you alone...