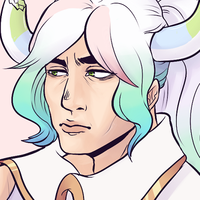 Jing Hong (his name should technically be written as "Hong Jing", but I organize my OCs based on first name and therefore usually write their names in Western order)

Demiromantic/he doesn't want the chastity overking to throw bibles at him!!! she has incredible aim

Sarcasm, those who fight without strategy, totally curbstomping someone, having people pull his hair, being rushed (especially when getting ready in the morning bc he takes 50 years), white chocolate (he thinks it's too sweet), papercuts, people who cheat in any context, wasting all of his Magic Stones on a Godfest in PAD and not getting anything he wanted, microtransactions, people who have no respect for their elders or superiors (excepting cases where said elders or superiors are terrible people), being in vehicles (they're so small and they move without your legs moving?!?!), strong perfumes, elitists.

Jing is very concerned about honor and fairness and strives to ensure that any opponent or student of his has an equal chance at succeeding as he does, even if he personally has something against them. He tries very hard to keep any personal opinions of his from affecting how he addresses others and is working on overcoming the prejudices that Heaven College tried to ingrain in him.

Though he's a friendly person, he isn't that great in social settings and tends to feel awkward when attempting to make small talk with others. He doesn't understand jokes very well and can't detect sarcasm, often leading to him taking witty comments or common phrases literally or otherwise in the wrong way. He has a serious nature, so he has a hard time relating to people who joke around a lot anyway. He's more at home discussing things like intellectual pursuits, creative arts, combat strategy, philosophy, gettin' buff, and current events. He likes to get into long-winded but calm debates with Yenzhal.

On that note, though it seems to be rather unlike him and he tries to hide it, he feels a bit intimidated by his co-workers. He's spent so long in Heaven having it drilled into his head that demons are evil, vile creatures and that Hell College detests Heaven College with a passion. As such, he sometimes feels as though he's in enemy territory despite having graduated from Hell College and having made his name as a talented professor who many students don't even realize ever was an angel.

He tends to be guarded, but especially so around fellow faculty members. Around students he generally feels at peace, as teaching is something he loves doing and he feels deeply personally invested in those he teaches. He makes an excellent teacher thanks to his boundless patience and is the sort of person who will never give up on a student so long as said student truly wants to succeed.

"I will not ask for your trust. I only seek to help."

Jing's backstory was nothing significant up until he received an invitation to Heaven College. After graduating he became a professor there, training students to learn how to defend themselves. He loved his job, but from the moment he became a professor he felt something was wrong. Heaven College was in the middle of changing quickly, and as the years went by he found himself being increasingly pressured to emphasize that the students were being trained to specifically combat demons. He felt uncomfortable with this and the dishonorable tactics he was encouraged to teach, especially as he began to learn what happened to many of the Hell College students that his students captured and returned to the Overkings...

For a long time he continued to teach, but without passion or love. He became very cold, stuck between the desire to give in and embrace what the Overkings insisted was true or to follow his gut and abandon them, instead descending to Hell College to give them a fair chance against Heaven College.

His breaking point came when Heaven College unleashed their grandest attack on Hell College yet: they took advantage of a research subject who they utilized as a biological weapon, using them to overtake the labyrinth while the students and faculty of Heaven College were ordered to attack campus proper. It was dirty, underhanded, morally corrupt... Jing couldn't bring himself to fight with Heaven College any longer, and in the midst of the battle he turned against them and came to the aid of Hell College, remaining there after the battle was finished.

He was initially met with hostility and suspicion, which he expected. Determined to prove himself, he graduated from Hell College and then applied for a job like any professor would, impressing the Underkings so much that they had to accept. Upon becoming more accepted among Hell College's faculty, he became a valuable informant, discussing what he knew about Heaven College - especially about the nature of their recent attack. Unfortunately, as he hadn't been trusted by the Overkings due to his lack of cooperation he didn't know everything, but he certainly gave the Underkings more information than they had before.

He now enjoys his new professor job in Hell College, in which he specifically emphasizes the importance of support classes, insisting that a DPS class just can't succeed without the aid of tanks and healers. He teaches people about buffs, debuffs, ailments, passive skills, so on and so forth - generally, of course, as some other professors have entire classes on those subjects individually - saving direct offense for other professors.

Though he's trained in nearly every form of combat under the sun, Jing's strong point is actually support skills. He's an excellent support tank and also has healing abilities, which he often uses on his students during class because he's a good guy and his students are already in enough debt as-is without needing to go to the Hellspital, so...

At Heaven College he was classified as a patience-class angel. He gains power from being attacked; when any form of suffering is inflicted upon them, they absorb energy from it. They can reflect this back upon their opponent - perhaps twofold - or they can compound this energy and compress it into a smaller, but permanent power boost.

Though he's technically a demon now, he still has his virtue affinity powers and Hell College is having some trouble slapping a sin label on him due to his almost annoyingly virtuous nature. The closest label would probably be sloth, since patience abilities do have a little overlap with sloth's... but he's so diligent!