Miles is a depressed student doing a doctorate. He is passionate about AI and robot development but also has a sharp artistic eye.

Miles is typically sluggish and looks like he's dragging himself anywhere he goes. He doesn't like to speak much for fear of boring whoever he's talking to with his interests.

His main interest, robotics, is what he focuses most of the little energy he has on. He is immensely knowledgeable on the topic, and even delves deep into the ethics of his work.

Miles works on his projects at a slugglish pace, abandoning most of them before their completion. He does have brief periods of time where he experiences bursts of energy, but they are rare and far in between.

He neglects himself a lot. Everyone else matters more in his eyes. He views his own work as superior to himself. He often forgets to eat and sleep, so he's usually exhausted and runs on caffeine pills.

His sense of humor consists mostly of self-deprecation and sarcasm, although he makes the occasional jab at someone else, but he immediately feels guilty about it.

Miles was born in an average family. His parents felt as if they had to have a child, so when he was born it was just another checked box. His parents cared for his wellbeing but were never too invested in him.

He went to a charter school where he learned about philosophy and ethics as well as robotics and immediately became passionate about those topics.

Because of his parents' neglect and his peers' bullying, Miles developed a lack of self worth as well as depression and anxiety. His only refuge were his interests.

His first and only fully functional, lifelike creation is Aria, a human-like android he created as he pursued his Master's degree.

Aria's sunny disposition and extroversion brought positivity to his life, and their need for assistance with tasks like making food at the beginning of their life brought him structure. Although he still has a long way to go, Aria's positive influence encouraged him to seek professional help for his mental health.

Unfortunately none of the medication available to him worked without causing severe side effects, so he's making an effort to improve his mental health without them, as hard as that may be. Aria helps remind him to do self care and can be an honest critic when he needs one.

Miles has a Master's degree in robotics and is currently pursuing a doctorate, writing his thesis on the ethics of creating sentient androids.

Aria is the only person Miles has allowed to get close to him. He loves Aria dearly and would do anything for them, as they are his "perfect creation." They view each other as family. 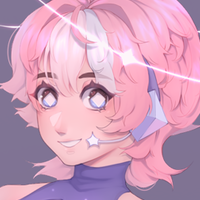