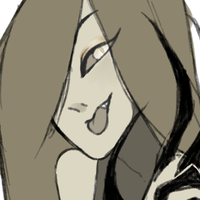 Killing her own meals, spiders, nighttime, milk, running her hands through anything, interesting rocks, beaches, warmth, the intricacies of mortal bodies, anything that feels alive, repetitive sounds, singing voices, animals, being buried under things.

Burying herself in the sand and scaring people who pass by.

There's something unsettling about the way Celesca carries herself, something unnnatural and inhuman. She stares for too long, takes too long to respond, speaks with too lustful of a tone, tilts her head too far. Celesca drags herself through life slowly and leisurely, every movement being creeping and languid. She's curious, playful, and likes to tease and toy with people. She takes her time picking people apart, savoring her experiences until the desire to consume their souls is too much to bear.

When she isn't on the prowl, she spends much of her time sleeping or hiding in places where she can listen to the sounds of those around her going about their daily business. She's surprisingly easy to talk to, but be wary: her demonic nature urges her to devour all who draw near.

"Ahh, so that's the nature of your soul... I'll make sure such a beautiful thing doesn't go to waste. ♥"

Celesca was developed by the magitech branch of Heaven College as an experiment. Could a being be created that was both living and machine? Could something with emotion, thought, and growth be created that could be freely programmed and controlled at will? Could a robot be created using souls? Could the souls of demons be used to create beings that angels could control? Heaven College proceeded to abduct several of rival school Hell College's students, taking their souls and binding them to a construct of their design. The end result was Celesca: something resembling a cybernetic body powered by demonic souls.

Hell College wasn't happy when they found out about Celesca, and returned the favor by abducting Heaven College's students and creating Hellscream. They sent Hellscream to destroy Celesca, and Celesca's creators ordered her to disable Hellscream at any cost. They emphasized the importance of not destroying him or consuming the souls that powered him; they wanted those souls back, but more importantly they wanted to examine Hell College's work and use it against them. Celesca obeyed, but her fight with Hellscream took the two across Realities, far from either school. Heaven College didn't make any effort to recapture her; it wasn't worth the time or personnel, and they had plenty of other speciments to work with anyway.

Celesca and Hellscream wound up being apprehended by the Space Police and were dropped off on opposite ends of a planet called Celestella, which was used to house dangerous beings who couldn't be safely locked up. They found each other again eventually and resumed their fight for several years, but eventually Celesca damaged Hellscream to the point of deactivation. Her mission completed, she...

...Well, she wasn't quite sure what to do. She couldn't exactly take Hellscream back to Heaven College. Left without a directive, she began wandering the planet in search of a way to return home.

Celesca has inhuman strength, speed, durability, reflexes, and is capable of flight. Unlike her counterpart, she lacks any miscellaneous gadgets or unnecessary functions, and she's considerably more organic in appearance. Her claim to fame is the demonic souls that power her, which physically manifest as shadowy vines and tendrils that sprout from her back. She can manipulate these as she pleases, changing their shape and size as needed. She also is capable of powerful demonic magic which grows ever stronger as she continues to devour souls.

The longer Celesca goes without feeding, the more corrupted she becomes. She becomes unable to retract her tendrils and they spread across her body, attempting to reach out for whatever comes near. Her humanity fades and her base instincts to consume souls takes over, though once she's satiated her normal personality will return.