About
even in a pandemic, i still have to go to work;
blasian queer woman who lives for fandom;
current big 5 are hrak, dcmk, kny, op, fate/
ｙｕｕ 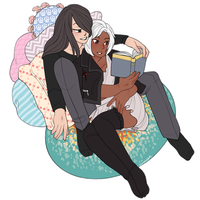 Posted 1 month, 4 days ago by _featherweather

so heres my quasi-monthly update so peeps know I'm not dead?

This past week has been up and down for obvious reasons. I'm not outrageously public about this but if you dont support the idea that black lives matter then you probably need to follow someone else cause... I'm black. And racial injustice has been a thing I've dealt with from a young age from unsolicited touching because people wanna feel my hair to outright racial slurs while walking around the city.

Yanno the worse thing? Hearing and seeing everything was *not* the most stressful thing this week. Although it was stressful and remains stressful even though I am very glad to see so many places are stepping up to be better.  But what took the cake ended up being some absolute bullshit that should have never happened if people got some common sense.

Putting it in spoilers because of mentions of the following triggers - CSEM / child sexual exploitation materials and sexual assault, along with mentions of "pedophilia" (by the fanpol takes), anxiety attacks, suicide baiting and attempts.

I've talked a bit about it on twitter (thread here) but essentially a big account that constantly screencaps peoples art to label them pedos posted images of an ACTUAL child being sexually assaulted. And rightfullyngot fucking banned because, even if you censor it (which they supposedly did but did a shitty job of it) they were still posting CSEM which is illegal af.

And then idiots asked where the Twitter account went and they asked for fucking proof. And a few wingnuts had /screeshoted the post and sent it to people/, all of whom now have committed a federal crime by both possessing and sending CSEM.

And these users had a bitch fit when they got reported for having it and got mad when we pointed out it wouldnt be unthinkable that they get reported to the FBI and possibly put on a sexual predator list.

"But it was an honest mistake, I'm not a pedo!"

No shit, but neither was any of the JJBA fanartists you sent to the hospital at the start of 2020 with your bullshit, or the artist who drew humanized Nooklings as geicomi style men (I cannot believe someone called art of two big, buff hairy men "actual children" jfc).

And unlike those fanartists, these fanpol actually committed a crime! Because they treated the abuse of a real, living child like they would fanart. And this is inspite of plenty of people telling them to stop treating drawings and fanart they dont like (which is fine to not like everything) like it was the assault of real people (which is not fine). Because this culture of purity policing and potentially landed a few dozen people into trouble with the feds, some of them kids, because they thought that chasing clout was more important than reporting actual crimes correctly.

The worst part is, I can probably blame some of this on lack of education but tbh... where the fuck are these kids parents and why are they not telling them how to be safe online. Like

So many people have tried to educate the users who are caught up in this situation but they just laugh and go "lol pedo" or spam with quirky death threats as if that's not a legit concerning thing they could be doing.

so yeah. That's been a shit show. Cannot wait for either Fanexus or Bobaboard to be available so i can fandom without death threats because I'm legit sick of them.

Other than that? Things have... been... got a few packages so now I have a umpc for writing, new doujin, face masks so I can maybe leave my house after work and the ability to make amiibo cards.

Oh! I lost my ☆ and I have zero plans to put more money into toyhouse for a variety of reasons so now a bunch of my codes are broken af. Probably going to clean them up as well as clean up my following, bulletins and more. Eventually. 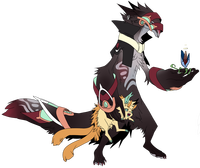