a collection of tales [[ chronocompass writing ]] 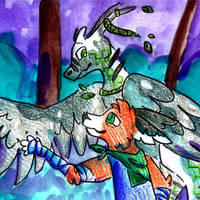 So I'm in this group that has me write quite a bit about some of my characters, and I figured I could put that stuff as a series on here! These short stories probably won't connect much, if at all.

Tenoch had failed in his mission, completely and utterly. It was honestly a bit embarrassing - he had never faltered on a hunt before, and now a rag-tag group of riders and dragons had been able to escape him and his own trio of dragons. He had led a chase after the last remaining dragon after the others had escaped into a reflection where he could not follow. And yet, after several days running after and fighting the slippery green dragon who called himself Dremalk, their prey had been able to escape into shadow, and not even Anonymous' watchful eyes had been able to spot him.

Or at least, that's what the scheming Non had told him. He spun a fabric of stories and tales, of not being able to  follow the group into the reflection realm exactly despite his metal element, and of his true sight just not being good enough to follow Dremalk the final time that they lost him. Tenoch suspected Anonymous had some other plan in mind, and he didn't like that secrets were being kept from him. Everyone was running low on sleep and patience. Having nothing to show for his mission but the essence and memories of one insignificant dragon, Tenoch had set up camp and paid no attention to his dragons. When Dian and Hestia mentally nudged him to try and get his attention, he said nothing.

They had failed him, too. This was why he worked alone, he thought to himself as he pulled his blanket up, over his head. This was why he should have never let himself grow closer to the lesser beings cuddling in a pile around him, to warm up from the cold.

Dian and Hestia stayed together, as they always did. The two had burned a circle in the grass for them to rest in, and the flickering light of their fires were a frustrating reminder that he was stuck with them. Anonymous was at the edge of the clearing in the woods where they had stopped for the night, absentmindedly juggling several of his gold pieces of jewelry back and forth. It was quiet, beyond the sound of leaves rustling and wind whistling.

Non wouldn't return to the Militia to report his failure for several days. He needed to plan out a way to pacify the officials, to prove to them that he still had some worth. And also, of course, to prove to himself. Tenoch had been in the town of the rebels once - a quiet place, with few defenses to speak of. Turned away from his dragons, he closed his eyes, and expended the energy he was able to glance into the future.

Possibilities lay out before him, a winding map of futures reliant on the choices of many. Tenoch skipped past the bad futures - the ones where he was killed, or cast away, or where he and his dragons turned on each other - and found the decisions that ensured his survival. He saw Salvus, and he saw what he had to do. Every path he considered following converged in one week at that town, at the exact place where his escaped quarry would have returned to.

A wet tongue licked his nose. Wait, that wasn't part of the future, was it? Tenoch opened his eyes, returned to the present moment, and stared in confusion at the fluffy figure in front of him.

It was a dog. White, fuzzy, and right up in his face. Tenoch reached out to slap the creature away, but instead, he chose to sigh, and pet it instead. He glanced around. Some time had clearly passed. Dian and Hestia were fast asleep, and when he glanced over to Anonymous, the shadowy dragon was smirking at him.

"Non, what is this?" Tenoch asked. He sat up, blanket falling off of him, and frowned down at the dog next to him. "Why are they here?"

Anonymous chuckled. He was leaning on the tree he was next to, nonchalant as always. "Dog came by a few minutes ago. I figured there wasn't any reason to chase them off. Cute, aren't they?"

The dog wagged their tail and barked. Loudly. Tenoch grimaced. "I'm pondering how to convince the Militia not to have our heads and you think I care about how cute something is?"

As the dog nudged his hand, asking for more pets, Anonymous glided closer. "Well. You've been fuming ever since we lost track of our quarry. Why not relax for a bit, enjoy the quiet moments of life?" He bent down to pet the dog himself, with one ghostly hand.

Tenoch glared up at Non. "What, did you bring them over here?" Dian and Hestia were beginning to awaken. Delightful, bring the whole crew on by, why not? He wasn't enjoying any part of this. "I don't need a dog, Anonymous. You all suffice enough, in that."

Non laughed, then, and the dark sound fully woke the two siblings. They began to wander over to Tenoch and the others as the dog spun in adorable circles. "I merely thought someone with a good nose and swift paws might be a helpful addition to our little team," Non explained, with a dramatic flourish of his free hand.

Dian and Hestia were instantly captivated by the cute little creature before them. "Are we adopting a dog?" Dian asked in curiosity.

"No!" Tenoch said in frustration. "Come on, the three of you cause enough problems as it is, why would I want to add a dog to our squad as well?" He lightly shoved the dog aside and stood up, throwing his blanket over one shoulder. "We're not even a squad. If I wasn't tied to all of you I'd be off on my own, right away."

"But unfortunately," said Anonymous, "you are, and there's reasons beyond cuteness to keep this fellow. None of us can sneak into the rebel's town, we'd be recognized. Even myself, if I hid. But no one knows of a dog associated with us. Give me a few days, and I might be able to train us a spy, hmm?"

Tenoch had to admit to himself, he was seeing the benefits of this now. He moved to pack up the supplies lying about the clearing. "Fine. But it's your dog, not mine, and if it barks up a storm you'd better quiet it down. Now, are we off to plan our next move or no?"

Dian and Hestia begrudgingly moved to help, and Anonymous smiled at the dog, a glimmer of mischief in his multicolor eyes. "We're going to cause all sorts of trouble, you and me," he said.

"I heard that!" Tenoch called over his shoulder. Anonymous responded with more uproarious laughter.

As the group set out from the clearing, more bickering could be heard, but as much frustration as there was between rider and dragons, they set it aside and worked to discuss the next steps to be taken. They still had an unfinished hunt to complete, after all, and going their own separate ways wasn't an option thanks to the bond between them. Salvus would certainly be getting some dangerous visitors soon... though if they came on their own, or with company? That was still up in the air.

Tenoch was sure his glimpses of the future could assist him in that.