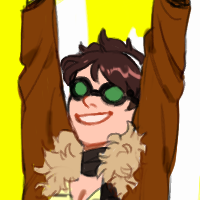 Jill prepares a new specialty for her Christmas party.

One of the earliest pieces I ever wrote with the Catband characters was a short story about one of Jill's legendary Christmas parties, so they've always had a special place in my heart and I wanted to write a little thing about one of them before Christmas was over.

I didn't quite make it before midnight, but hey, it's still Christmas somewhere.

Jill threw 300% of herself into everything she did: it was why he loved her, her big heart, and her sparkplug spirit. It was also why Jesse was now sitting at her kitchen table with the slightly grim but gamely and lovingly determined look of a man who knew exactly what to expect when she placed the dish before him. Fork clenched in one hand, glass of milk in the other, Jesse followed the dish in his girlfriend's arms with his eyes as it made its fatal transit to his place at the table. "Lay it on me. What is it?"

"Mmmm, what should I call it?" Jill asked the casserole dish, gesturing to it with all the dramatic flair and pride of Michelangelo's God creating Adam. "It's potatoes au gratin, sooo... Jillest's Illest Cheesy Potatoes."

Jesse snuffled a laugh. "Nice one."

Jill's latest creation was, if approved by her official taste tester, destined to be eaten at her Christmas party. There would be other parties-- for Christmas itself, they'd fly to Jesse's mom's place in Texas, and Lupe's abuela always invited all of her granddaughter's friends around for their beautiful Three Kings Day feast-- but Jill's Christmas party, an annual and beloved potluck affair with drinks too strong and music too loud and a landlady very much too vexed, was always the pride and joy of her social calendar. She'd be there with literal bells on-- and probably reindeer antlers or the sort of dress Mrs. Claus might have worn in much younger days; Santa hats would be taped over the bored, sexy faces of every band poster in Jill's apartment; and mistletoe would be hung with aggressive frequency over every minutely kissable locale in her small apartment. Jesse liked the last part perhaps the best.

Jesse started coughing violently into his arm, grabbing for the glass of milk and taking a lifesaving swig.

Jill rolled her eyes, unimpressed, waving her wooden spoon in an accusational point. "It's not that spicy, you baby."

As the last few coughs subsided, he looked at her with suspicion. "Did you try it?"

A shade of guilt passed over Jill's face, gone as soon as it had come. "Maybe I eyeballed it? But don't play me like that; it can't be that bad," she insisted, taking Jesse's fork from him and scooping out a lusty forkful while he dutifully held the glass out to her. Jill ignored him, taking her bite with all the smug confidence of a mother showing her baby that mashed peas weren't poison.

And then she was grabbing for the glass, too. Jesse laughed, delighted. "See?"

"Too much sriracha?" Jill poked at the dish, disappointed.

"Maybe a bit. And the chilies? I don't think potato au gratin is usually a spicy dish."

"Oh, but it should be," she complained, throwing herself into one of the kitchen chairs. "This sucks. Now I need a new dish for the party."

"Maybe we can tame it with more cheese, or--" but Jesse had already lost her; Jill was already excitedly rattling off whatever her latest idea for a dish was.

"Yeah, babe?" he asked, gently stroking her knee to try to keep her here on Earth.

"I should give this to Mrs. Petersen. She definitely needs more spice in her life," Jill cackled, springing up to fetch aluminum foil from under the counter.

Jesse laughed, helpless, standing up to hug his girlfriend from behind and smooch her cheek while she stretched out the foil. "Sure, and when you come back, we can make your new dish together."