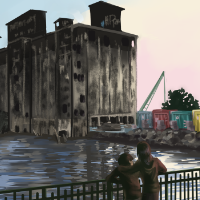 Roadie wakes up early in the practice space and finds out where Haggis goes in the mornings.

I'm sorry if you've seen this scene before; it's just one of the very few excerpts I have that doesn't spoil anything from the comic, lmao. I have a lot of little prose scenes like this-- I'll fish around and see what else might be ok to post.

This was written a few years ago and the location is the same as in this picture.

All the locations in the comic are real or based on real places (c. 2007); some photos of the places mentioned in this excerpt are on my street photography blog: the track (4th/10th pics), and Acheron/their practice space (9th pic); the soccer pitch (3rd/10th), the grain terminal, the canal, and the Abu Loujaine.

He had a hunch about where Haggis disappeared to in the mornings.

After a moment, he saw him-- a lonely shape running around the track in the pink summer morning. Roadie stood by the fence sipping his coffee, then after a couple of minutes, he went back inside and then out the front way, walking around to the park. He casually climbed over the low fence, transferring the travel mug to his other hand as he went, and sat down on the closest of the benches that circled the track.

"Red Hook Park" constituted a number of different athletic fields and facilities in varying states of repair, but this one definitely was low on attention. It was a rough oval of forgotten threadbare grass that was mostly dirt, with a few ghosts of painted lines and two sad goalposts to suggest the idea of soccer. The track was just a cracked concrete loop flanked by a handful of benches and lampposts.

Roadie just sipped his black coffee, thoughtfully watching the younger man. Haggis was in sneakers that Roadie never remembered seeing him wear before, a hoodie and shorts. Roadie took the opportunity to admire his ass.

Haggis had noticed him half the length of the track ago, but when he neared Roadie, he frowned. "What are you doing?"

"Admiring the beauty of nature in one of our municipal parks!" He gestured with one hand.

Haggis snorted. "Yeah, yeah." He rolled his eyes, but stopped running. "Just you?"

"Just me." He nodded his head toward the other man. "Track team in high school?"

"Yeah. Running was the only thing-- yeah." Haggis's voice always seemed to uncertainly cut out after uttering one personal sentence. This time he didn't even get that far.

Roadie judiciously left it. "You know there's a better track down by the water."

"You come out here every morning?"

"Sometimes here, sometimes I run around the neighborhood, sometimes down by the grain silo. It's nice, you know, in the morning. No people really, maybe truckers or whatever."

"Sounds like a good way to get shot in this neighborhood."

Roadie's tone had been light, but Haggis looked annoyed now. "I'm not going to get shot."

Roadie dropped his gaze. Haggis didn't have any headphones with him. "No music?"

"Sometimes." His answer was softer this time. "Sometimes I just want to think."

Roadie nodded, eyeing the runner over his cup as he took a sip of his coffee.

Haggis could have resumed running, but he didn't. He seemed to be considering Roadie. "You're an early riser too? So what do you do this early in the morning?"

"Read the paper," Roadie shrugged, obviously doing no such thing, but it's not like the old warehouse they called Acheron was anywhere near a newsstand.

Haggis tilted his head. Uncertainly, he said: "I could take you down by the water, if you've got nothing else to do."

Roadie almost spit, but he managed to swallow his mouthful of coffee before bursting into a little laugh. "I don't run."

Roadie made a lazy, peevish sound.

Haggis suddenly snapped: "It's not far, Christ!" His back was angrily turned from Roadie during this outburst, or he would have seen the sly smile on the other man's face.

It was a peaceful walk, filled mostly with amiable silence. Roadie could tell Haggis would rather be running, from the nervous excess energy the man fairly vibrated with, but he did slow himself down for Roadie. Haggis led them across another weatherbeaten soccer pitch until they met the canal. The mammoth derelict grain terminal rose out of the water like a great mottled black and tan beast. A neat row of shipping containers trailed before it, and a rotting shipwreck and a tethered old cargo ship lay behind. It was a sight, but Roadie could see why the other man liked it.

Haggis pointed at the cargo ship. "The Abu Loujaine. Used to be a ship, now she isn't. You know."

Roadie didn't know, and though he didn’t say anything, it must have shown on his face.

Haggis seemed frustrated at his unruly words. "They store concrete on her. She's been sitting there since the '80s." He turned to Roadie thoughtfully, then turned back to look over the dirty water. "You find out interesting things talking to the workers around here."

Roadie leaned over and kissed him. Surprised, Haggis pulled away, whirling around to see if anyone was nearby. They were alone, so he grabbed one of Roadie's hands and kissed him back. "This canal is real romantic scenery," he muttered into the other man's mouth.

"Shut up, dumbfuck," he mumbled between kisses.

Haggis couldn't help himself. "A regular Venice in Brooklyn."

"Next time I'll take you to the other end so you can enjoy the fumes."

"Which fumes, the canal or your breath?"

Roadie pulled away to lean on the fence, smiling.

Haggis joined him, elbows on the fence next to him. "I look forward to it. Tomorrow?"