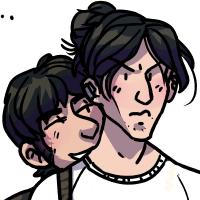 Roadie takes Haggis to the movies.

To the phobic: there are no bugs in this story.

"Isn't this the place with the bed bugs?" Haggis asked, staring up with suspicion as they approached the marquee. Some of the letters in the movie titles had been creatively substituted with numbers, or were missing entirely.

"There are no bed bugs," Roadie answered, nonchalant as could be.

They were at the movie theater in Roadie's neighborhood-- a grand, ancient thing that time had definitely begun to balance far more towards ancient than grand, though its long-faded beauty squared towards the fresh life of the park and the plantings around the war memorial with Brooklyn defiance.

When he noticed that the other man wasn't following him, Roadie turned around and cocked his head in curious impatience. "Just bored yuppies angling for a scandal in the local paper. And free movie tickets. C'mon, matinee prices end at 2."

Roadie had insisted on this, all of it, with a level of enthusiasm that surprised Haggis. Roadie could have picked the art-house theater downtown if he wanted to see one of those documentaries he likes, or the big multiplex by the courts with the 3-D glasses. But they were here, in his dilapidated local theater, the one that may or may not have bed bugs.

"What movie are we seeing?"

"No," he affirmed, with a smile and a shove towards the plexiglas ticket booth, where a bored cashier was working on a sudoku. "Pick whichever one sounds the worst. No kids' movies."

Haggis could admit that the notice on the window about which theaters currently did and did not have air conditioning gave him pause.

They ended up with the third-or-fourth sequel to some action franchise that neither of them followed, and emerged into the once-gorgeous lobby armed with cash register receipts confirming that dubious decision. Haggis could see how it had been beautiful-- broad but shabbily-carpeted stairs unfurled their way up both sides of the movie house, with large, ornately-framed classic movie posters inviting the visitor to follow their path skyward, like beautiful fairies darting through gnarly undergrowth. All of it centered around a large, dusty chandelier with some of its lights out-- and behind it lay the concession stand. Their only company in the lobby, besides the sudoku-champion cashier/ticket-taker and another youth minding the popcorn, were the creased, askew grimaces of cardboard cartoons and burly action men advertising their movies, some of whose time in theaters had come and gone months ago.

"Do you want popcorn?"

"I wouldn't recommend it," Roadie returned, without further elaboration.

Haggis paused to contemplate the apparently ominous concession stand, but decided to defer to his judgment. "I'm gonna piss."

"I'll wait outside," Roadie told him.

Roadie didn't have to wait long for the show to begin.

"Roadie," the shocked howl came through the door, "None of the toilets in here have a seat!"

"What, were you going to shit in there?"

"Did you check under the sink?" Roadie was as nonchalant as he had been the whole time, though his tone betrayed a smile that Haggis couldn't see.

As if he were psychic, Roadie was right-- a single toilet seat lay sprawled on its side on the floor under the bank of sinks, flapping its parts to the world.

"Why is there a toilet seat on the floor." Haggis had been too distracted by the horrors in the dimly-lit, dirty bathroom to even use it, but finally he found somewhere to pee.

Afterward, they made their way up the creaking stairs, emerging into an atrium where windows almost the height of the building stretched as far up as the eye could see, inset against raw brick too old to be trendy. There was a cafe here, and ironworked balconies with round little tables and chairs, but all of it was dusty and covered in sheets. Strange detritus from various eras of the theater peeked out if you took a close eye to the balconies-- a grand piano? a go-go bar? Some art deco-style paintings spidered over the wooden floor, wherever they weren't covered by more dated cardboard standees attempting to give the place some color.

Haggis wasn't sure what emotions this place was giving him, but they weren't anything like seeing a movie at the art-house or the multiplex.

Roadie was tugging his hand towards one of the theaters, up a few more stairs-- smaller now, crazily winding, and meandering in several ugly-carpeted directions. Roadie knew the right path, and the name of their movie had been printed out on a laserjet and taped to the door.

A mother ran after her toddler on the way to some animated movie further up the maze of stairs, so at least Haggis could be sure that this building wasn't some fey trick after all. He shook his head and followed Roadie into the room.

Like the rest of this place, their theater was an interesting combination of old and... less old. An iron balustrade formed an arcade at the back of the theater, angling down into what Haggis instantly discovered was a sticky hell. The gaudy purple-and-gold carpet was like gluepaper, the movie screen was torn and taped back together, and Haggis nearly sat in a broken seat before Roadie deftly dragged him to what he apparently already knew were a couple of "good" seats, if covered in blackened gum spots and tilted maybe too close to the ground.

No one else was in the theater, and nothing was happening on the screen, though it was past the time marked on their tickets. Haggis pointed it out.

"Oh yeah, sometimes they forget to start the movie. You just have to go get someone," Roadie explained, with all the cheeriness of describing a funny habit of a wayward puppy or kitten-- and with that, he left the theater again to go find the projectionist.

Haggis wasn't sure if it mattered if the movie played, or why any of this was happening at all.

When Roadie came back, he dropped into the seat with a satisfied sigh. Haggis waited a few moments before he said it.

"Roadie," Haggis said with unusual gravity. "This place is a shithole."

"Yes," he answered, stretching an arm comfortably around Haggis's shoulders.

"I like it here," he answered, voice sincere and softer as local promos began to play before the movie: a discount on muffins from the bakery across the street was sandwiched between an ad for a pay-by-the-hour motel near the tunnel and another for a paternity testing lab. "It's cheap, no-nonsense. Lots of history. Vera likes to tell me about the movies she saw here with her husband when they were still kids."

Haggis leaned into his arm, but he still didn't quite get it.

"Sometimes I take her to a movie if she wants to see something," Roadie added, incongruously content about the idea of bringing his sweet elderly neighbor to this dump.

"But why are we here, seeing a movie neither of us cares about, in the middle of a weekday, when there's no one else in the theater?" If this were one of Izzy's hare-brained ideas, or even if this had been Roadie a few months ago, he knew he'd be cursing up a storm, stomping out of the theater, yelling about his dumbass friends. But this felt different.

"Maybe I wanted to kiss you in public," Roadie whispered, leaning in, "And not have to be afraid if anyone sees." He kissed him, gentle and slow. Haggis melted into the kiss, curling a hand around his bristly jawline.

A preview for some action movie suddenly burst into their little scene with explosions, illuminating the room in ostentatious flashes of red and yellow. Startled, Haggis reeled back in his seat, the hinges protesting with a loud, angry squeak.

"Are you sure this place doesn't have bed bugs? Seems like it's got everything else."

Roadie hmmmed, leaning back in and mouthing playfully along his neck. "I'm sure. If you want something in bed to bite you, you can keep your six dollars."

Roadie is the only character who canonically lives in my neighborhood, so since I couldn't get the idea of this story out of my mind: an obituary to the Pavilion. Every detail I included about the theater was true (including the made-up bed bug scandal). It's since been bought again and renovated into some hipster theater/restaurant, and while I'm glad it's finally in the hands of someone who has the money to care for the old building, it's bittersweet, because it's also now unaffordable and doesn't play most movies. Like Roadie, I can't help but feel a little romantic for the days when it was a cheap, reliable dump-- maybe not a diamond in the rough, but at least a cubic zirconia.