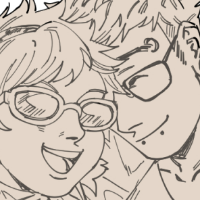 Jesse finds himself in deadly danger.

Was lying in bed at 4:30 am thinking about my OCs as a storm raged overhead, as one does.

An octopus had him its deadly grasp.

The cruel tentacles were dragging him deep beneath the churning waves and he was drowning, suffocated by their evil grasp. He would never see the sun again, doomed to a death acknowledged by no one but the fish.

He thought, groggily, in his final moments, that this didn't make a lick of sense. Moments ago he was a brave desperado with a horse named Cactus. Was Cactus ok? He was glad his faithful steed had been spared this fate.

But then-- was that a little shriek? Do octopuses shriek?

Octopuses? Octopodes? Octopi? Octopussy? That last one was a movie, right?

Jesse cautiously opened his eyes to discover that the octopus was, in fact, no deadly marine animal, but actually his human girlfriend, her arms wrapped tight around his middle, the blankets bundled securely atop their heads.

And she was shivering.

"Babe?" he tried, reaching a hand down to slide over her back reassuringly.

A huge thunderclap boomed above their heads, and she made another little squeaky sound, burrowing her face into his side.

"Are you afraid of thunder?" he asked, unable to help yawning. What time was it? 4-something? He didn't have his glasses on.

"No," Jill mumbled, into his shirt, obstinate.

"Because you seem pretty--" Another thunderclap resounded frighteningly close, and she squeezed him again.

"I am not scared," she warned, before he could say anything more.

"Oh, ok," Jesse agreed, freeing his other hand and holding her tight with both. "Because I am. You'll keep me safe, right?" he asked, kissing her forehead.

"You are not scared," she accused suspiciously, leaning up partway to glare at him.

"I'm so scared," he persisted, rolling them over and smooching her into the mattress. "I need my brave girlfriend to save me from Thor's wrath. Help me."

"Why do I even love you," Jill groaned, laughing and pushing his dumb face away.

"Because I'm taller and that makes me a bigger target for lightning strikes?"

"Stop," she laughed, but she had forgotten all about the storm.