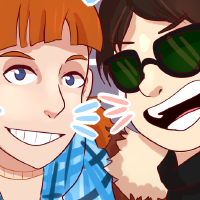 "Easy there, birthday girl," Jill laughed, stealing Amber's latest drink away and leveling her with a look. "How drunk are you?"

"Not nearly enough," Amber insisted, ignoring her shorter friend's attempt to play keep-away and bending down to sip from the confiscated drink anyway.

Jill finished the drink with a flourish. "I am not afraid to drink all of these if it saves you from alcohol poisoning." Jill was never the responsible one when they went out, but she was trying it on for size today. Her resolve probably wouldn't last very long, but hey, it was an attempt.

"Jill, it's not like I've never been drunk before," Amber complained.

Her best friend snorted. "Like you need to tell me that. Yeah, girlie, but you've never had so many free drinks given to you."

They were at some shitty little place in Williamsburg-- was it a biker bar or a punk venue? or just kind of its own thing? There were old motorcycle wheels making some kind of arts-and-crafts chandelier over the worn wood and brick interior, but the patrons didn't seem the type. It didn't really matter, though: both of them were finally legal, and any bar that asked for ID immediately felt way more adult than the DIY venues selling watery no-questions-asked beer that they usually frequented. The drinks were cheap, the music was loud, the bands were easy to make fun of, and the newly-21 Amber was accumulating free drinks from friendly patrons like they were going out of style.

The next band was just starting. It was some kind of noise metal with...

"Is that a harmonica?" Jill asked, incredulous, forgetting about the alcohol.

There was definitely a guy playing a harmonica. There were also two drummers, and far too many cymbals for the little riser at the back of the bar. And at least a dozen effects pedals.

The whole thing was extremely loud.

"Jill, Jill," Amber shouted urgently, grabbing Jill's shoulder in excitement, "Oh my god. It's a cover of 'Heart of Gold.'"

"Holy shit, is this a metal Neil Young cover band??" Neither of them had been paying attention to whatever the band had introduced themselves as, but "Powderfinger" was, in fact, painted on one of the bass drums. No, wait, make that "Powerfinger," with no "D."

The harmonica guy was wailing away lustily on his little metal instrument, Neil Young's classic hat atop his head, covered in pins with inverted crosses and pentagrams. His plaid shirt was ripped to expose his pale shoulders, and he had leather pants on.

"Jill," Amber insisted loudly, wrapping her arms around Jill's shoulders from behind and resting her face drunkenly on her friend's head as the awful band sandblasted the bar with noise. "This is the best birthday ever. You're the best, Jill!"

"Have I ever led you astray?" she asked with affection. "And you're the best friend I could ever ask for, you goof."

"Jill," Amber continued, forgetting all about the conversation, "If we had a band it'd be way better than this, right?"

"Oh yeah, best ska Sarah McLachlan cover band on the eastern seaboard," she joked, but when Amber didn't respond, Jill tilted her head to look at her, and Amber, still draped over her shoulders, was just quietly staring at the stage.

The title comes from Hot Hot Heat's [email protected]. I took my best friend to see them perform that album for her 21st in a similar shitty venue as the one in this story-- there was no Neil Young cover band, though. ; )