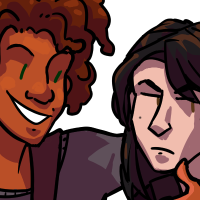 They’re about 14-15 here. Here’s a drawing of them from around the same age.

(Kay) Haggis is a recent transfer student from England at this point, and Izzy is the new friend he is now stuck with for life.

“I’m glad you left your guitar at my house last time,” Izzy grinned. The tall, weedy boy in the big ‘fro and Clash t-shirt was practically bouncing as he and his new best friend walked back to his house after school.

Kay eyed him suspiciously, pimple-faced and metalhead-disheveled, shifting his ratty backpack on his shoulders. “You didn’t mess with it, did you?”

Izzy flashed an untrustworthy smirk. “Nooooo. Just means you don’t have to go back home to get it now.” But Izzy had one of those bargain starter Tele-clones, and Kay had a gorgeous-sounding Strat that used to be his uncle’s, so it wasn’t really a question.

“Whatever. Just don’t break it, ok,” Kay looked away at the fallen leaves, voice lower. His hair was growing out and it draped a little in front of his face as he looked down. He liked it, a curtain to keep out the world.

Izzy laughed. “I’m not breaking any guitars yet. Not until we’re a real punk band with crowds packing venues begging to be showered in screws and splinters,” he sighed, voice gone dreamy. “That’ll be us someday,” he insisted. As things stood, they were a couple of ninth graders with a venue called Izzy’s bedroom, and an audience potentially of Izzy’s grandma, if she decided to come bring them snacks.

They were good snacks, though.

Izzy’s voice suddenly shifted high as soon as a particular house-- and resident-- came into view. “There’s my girl!!!” Izzy cooed, rushing towards a huge mastiff barking excitedly in its front yard.

Izzy was laughing, rubbing the dog with energetic affection and busy being licked everywhere the eager, wriggling animal could reach.

Finally remembering that he had company, he turned to Kay with a big grin. “Haggis! Let me introduce you! This is... well, I don’t know her name. A neighbor’s dog. But she’s such a sweetheart!” He turned back to the dog, mushing her big wrinkly face between his hands while crooning at her, “You are a good girl, aren’t you! Look, this is my friend, Haggis!”

Eventually Izzy realized that Kay was still standing far back. “What are you doing over there?”

Izzy frowned. “I wish I could have a dog. My akkoo and I love them, but we’re outnumbered. We’ve come up with some good names, though! I think this girl could be an Aansi or a Marsani or a Faaya or a Mii’a or a Nabira...”

Izzy scrunched up his face in annoyance. “And dogs aren’t actually haraam. There’s nothing in the Qur’an against them. But a lot of people think they are because of some other writings supposedly based on things the Prophet said.” He heaved another sigh, mushing up the dog’s slobbery face again. “I’ve got to wash my hands like seven times when we get home, though. But you’re worth it, aren’t you, girl?”

Kay still hadn’t moved, so Izzy turned to him again with more scrutiny this time: “Seriously man, are you afraid of dogs or something?”

Kay didn’t answer the question, but he tried to morph the fear in his face to distaste. “I’m not coming near that bloody thing.”

“That fuckin’ thing,” Izzy corrected, smug. “Don’t worry, I’m going to teach you all about how to be an American.” He turned to the dog. “But you’re not a thing, are you, girl? No! No, you’re not!”

Kay flipped him two fingers, and Izzy glided over to him with glee, taking his friend’s hand and folding one finger down. “There you go.”

“Izzy, I swear someone’s going to murder you someday, and it’s not going to be the dog.”

Kay grabbed him in a headlock with a little growl, and Izzy screeched while the dog started barking excitedly.

Izzy and his long skinny limbs had the reach advantage, but Kay was stronger.

Suddenly Kay screamed and broke away from Izzy. “Did you bite me?”

Izzy straightened up, with a crazed grin and all the smug airs of someone who definitely hadn’t been wrestled into a headlock a moment ago. “Man, I have four older brothers. I know all the tricks.”

“Why am I your friend?” Kay groused, annoyed but not really angry.

“The sick guitar licks. Anyway, wanna pet her now?” The dog was still standing against the fence, barking eagerly, and Izzy had gone back to scratching her floppy brown ears.

Kay looked at him, baffled. “Why would you think I’d want to now?”

“Well, now you know which one of us is most likely to bite you,” Izzy grinned.

His friend frowned, starting to walk off while still giving the dog’s yard a respectful berth and a nervous look. “No. Why can’t neither of you bite me?”

Izzy quickly bounded over to catch up, after a loving farewell pat to the mastiff. “You can’t always get what you want, my friend!” He paused for thought. “I want to learn that on guitar!”

The dog names are some Oromo girl names:

I also want to point out that the guitar described for Izzy and pictured in the drawing definitely isn’t the sunburst Telecaster he has a decade later. You’re not breaking any guitars yet? Yeah, we’ll see, buddy.