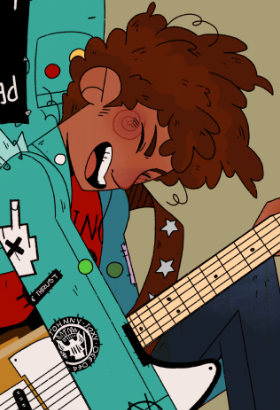 Frontman of Persephone's Winter. Straight-edge loudmouth, personality and a half. 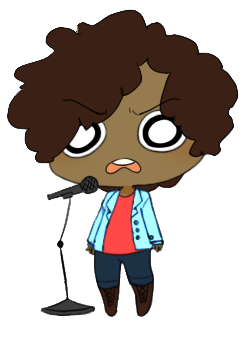 Izzy has been playing in a punk band with his best friend Haggis and college buddy Xero for years; when he finds out about Catband, a TV battle of the bands contest that promises national exposure and a large monetary prize, he's convinced this is the band's big chance at fame and fortune. He recruits Haggis's brother Scurvy to play keys, and Roadie, a bassist, to enter the competition as five piece.

Now he has to contend with the other bands both on and off the stage, keep his own band in one piece-- and meanwhile, the contest might be more than it seems...

But he's hell-bent on them winning this thing, whatever it takes.

Izzy's a fierce and obnoxious little punk, but he's ambitious and excitable and determined to lead his band to musical immortality.

Everything about Izzy is over the top: he's noisy, rude, impulsive, hotheaded, enthusiastic, and all over the place. He throws himself wholeheartedly into everything he attempts, even if he's got far more energy and drive than he has skill. He tends to annoy people, but it's because he's very driven and intense. His other faults notwithstanding, he does care a lot, and his friends like him for that.

He picks fights he doesn't intend to finish and will get in anyone's face and tell them exactly what he thinks of them. He doesn't have much of a filter, so he says everything he's thinking and gets himself in hot water, but he's good at weaseling his way out of things, and though he's both rude and crude he's also a good talker. If he doesn't persuade someone to see his way, he can usually annoy them into submission, whether he's conscious that's what he's doing or not.

Izzy lives for noise, crowds, and excitement, and he always wants to be where the people are. He's the kind of person who always seems to "know a guy" and he's dedicated to making absolutely whatever connections he thinks might help his band. He has a lot of acquaintances, but only a few true friends.

When Haggis was bullied after first coming to America and transferring to Izzy's school, Izzy stood up for him, and Haggis has been stuck with him ever since.

There's at least one music venue the band isn't welcome back to, thanks to Izzy.

Izzy is tall and bony, with an angular little face, green eyes and a short reddish-brown afro. He's always in motion, can't sit still, and always manages to take up way more space than he should need to, sprawling upside-down on a couch or draping himself across the back of the van.

His punk jacket is his most prized possession: he made it out of a teal thrift store sportcoat he ripped the sleeves off and pinned back on. He changes many of the pins and patches to suit his whims, but he always reps his favorite bands on there, and the back is saved for a cut-out t-shirt from his own band.

Otherwise his style is somewhere between classy and punk: Sammy Davis, Jr. and the Sex Pistols are, as with everything else, his fashion idols. He's likely to wear some thrift store combination of the two styles: pinstripes, corduroy, suspenders, vests, punk band t-shirts, straps, chains, etc. He often has his pants rolled up to show his white socks like Gene Kelly, and a nice pair of wingtips. His red Minor Threat sheep t-shirt is one of his favorites, but he has a good collection of punk shirts.

You might see him with headphones around his neck that aren't connected to anything. He tends to forget them there.

Izzy's the baby in a big family that loves him but doesn't quite understand him, but of them, he's closest to his akkoo (grandma), who raised him to love old movie musicals with performers like Gene Kelly, Fred Astaire, Frank Sinatra and Sammy Davis, Jr. He was enchanted and this sparked his desire to become an entertainer. On The Town, Robin and the 7 Hoods, and Blazing Saddles are some of his favorite movies, and he knows how to tap dance.

He's straight edge, and now he's attempting to be vegan. It's not going too well. His favorite foods are anything salty, though-- Roadie has more than once suggested buying him a salt lick like a barnyard animal.

Izzy's always finding new causes to be indignant about and interests to champion. It's not rare to find him at some protest or other, and it seems like he's always angry about something. He switches around so quickly it can make him seem superficial, but he's never insincere; it's just the way he is.

He knows a little Oromo, but his family came to America when he was a baby, and he's not great at it. He's fluent only in English.

As a guy who can never enjoy a quiet moment, of course he also whistles.

He has four older brothers, two of whom are married with kids. Izzy is good with kids and adorable with his nieces and nephews. What do you mean he's a bad influence?

Izzy loves classic punk (and straight edge) bands like The Clash, Sex Pistols, The Ramones, Minor Threat, Cock Sparrer, the Dead Kennedys, and Anti-Flag, and he also loves lo-fi rock and pop punk. The Thermals are a good representation of the sound he's going for, and I imagine he sings kind of like Hutch Harris, but Izzy's voice is more... screaming.

His guitar is a terribly abused Fender Telecaster that once upon a time was painted in brown sunburst. His guitar strap is brown leather studded with 3d metal stars. He's a loud, enthusiastic singer and guitarist, if not particularly good.

Izzy is more serious about the band than any of the others, who are more in it for fun than any real expectation of the band going anywhere, but he believes in them, dreams of the band becoming wildly successful, and he is completely positive they will make it happen. He is deeply loyal to his boys and hates anyone who gets in the way, his biggest obstacle now being this hipster girl Jill and her twee little band Hedgemaze Expo.

He loves doo wop and old musical soundtracks as much as he loves punk.

Haggis is his best friend, his confidant, and a guy he would trust with his life. The pair have been fast friends since Haggis's family moved to America when they were in high school, when they were both little misfits.

Xero is another buddy from college, and along with Haggis, these three are the original members of Persephone's Winter. They're good friends, even if they're also the sort of friends who are usually insulting each other. 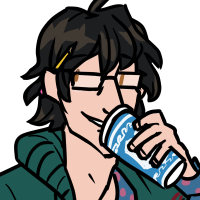 Scurvy and Roadie are the new recruits Izzy convinced to join the band for the sake of entering the battle of the bands contest. Scurvy is Haggis's twin brother, but Izzy didn't really know him until they convinced him to join the band, besides knowing that he was a good musician.

Roadie is the other new recruit Izzy got to join the band. Izzy respects Roadie's music skills, but sometimes butts heads with him because of their clashing personalities. 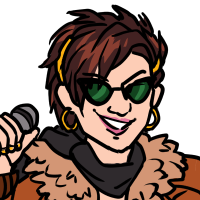 Izzy considers Jill, the frontwoman of his band's main competition in the contest, to be his nemesis, and the feeling is mutual. They do not get along.