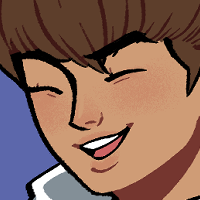 The siblings share a meal at the bowling alley.

Xero looked up from the bowling shoes he was spraying to the sight of his little sister approaching with a slice of pizza that looked like it had been salvaged from the ruins of Pompeii.

“Waf ome?” she asked, mouth full, holding out her paper plate. Xero eyed the wedge of charcoal briquette suspiciously, so she swallowed and elaborated: “Mom was gonna throw out the pie, so free pizza!”

Her brother laughed before giving the slice a critical eye. “Hmmmmm, I don’t know, that looks pretty rare to me: I think I can still see some bits of crust that aren’t black. I’ll have to pass: I prefer my pizza well-done.”

Manda rolled her eyes. “Your loss,” she shrugged, folding herself cross-legged into the chair beside the rental counter at their parents’ bowling alley to finish her meal. The lanes were open, but it was a slow hour for customers.

After a few moments, she turned to face him, leaning smug with unemployment on the side of the old vinyl chair. “How’s it going in the fumigation station?”

Xero made a sweeping gesture with the shoe deodorizer can in his hand, spanning the length of the lanes. “Ah, Manda, patience. Someday everything the blacklight touches will be yours. Though if you gather a bunch of hyenas to stage a coup to get at your destiny sooner, I will understand,” he sighed, finally offering her the can with solemn regret.

“Ugh,” she groaned, shoving it away, and Xero took the opportunity to pop her slice into his mouth, not because he really wanted it, but because it was the sacred law that all big brothers must always do whatever will annoy their little sisters.

“Kas!” she complained to an utterly unrepentant thief.

Manda turned over her shoulder to shout, “MOMMMMM, Kasper stole my pizza!”

“Good!” their mother called back, midway through scraping the rest of the blackened pie into the trash.

The girl huffed, and Xero ruffled her hair. “You finish your homework?”

Manda groaned. “Is that your Dad impression? I did, though.” Deprived of her dubious dish, she helped herself to something at random from the basket of candy their dad kept on the rental counter. A watermelon Dum-Dum. She considered the flavor before shrugging and popping the lollipop into her mouth.

Xero had gone back to fumigating the colorful shoes. “I dunno, it’s boring over here. Learn anything interesting lately?”

“Sure, I’ll read out my algebra problems and put you to sleep with the sweet, sweet sounds of math,” the teen drawled, having unfolded her legs and started tapping tunelessly on the linoleum.

“Oh Manda, you know my weakness.”

Waving her lollipop like a conductor’s baton, she began in a low, singsong voice to the tune of “Pop Goes the Weasel”:

plus or minus the square root,

Her brother had dropped his head onto the bowling shoes as instantly as if he’d been shot with a tranquilizer dart, and was making loud, pretend snoring sounds.

Xero ignored her and had begun literally repeating the letter “Z” aloud.

His little sister laughed harder. “Kasperrrrr.” She gave his shoulder a shove, and he finally pretended to wake up.

“Wuh? Huh?” Xero looked around as if confused, before raising his arms over his head in a big, exaggerated stretch with a fake yawn. “Oh, that was some of the best sleep I’ve had in years!”

“Doofus,” Manda commented, fondly. “Anyway, what about you? I’m sure your punk band is up to something more interesting than the quadratic formula.”

He made a dissatisfied sound. “Not really. No word back yet on whether we got into Catband. I’m still trying to book another gig for us... at some place Izzy hasn’t gotten banned from.”

Manda had always been the band’s number-one fan, ever since Xero had joined up with Izzy and Hag when he was eighteen and she was ten. She still wasn’t old enough to be let into most of the venues they played, but her support had always meant more to him than anyone else’s.

Still, she was fifteen now. A terrible thought struck him and he had to head something off.

“You’re not allowed to think any of my bandmates are cute. Especially Izzy.”

Manda wrinkled her nose. “First of all, ew. But second of all, I’m not allowed to?” she laughed.

“No,” her big brother insisted, shaking his head emphatically. “They have cooties. Everyone in my band has so many cooties. Just unacceptably loaded in cooties.”

“So you admit you have cooties too,” Manda interrogated, flat.

“Absolutely,” Xero agreed, staring her down.

But she had already snatched the can of shoe deodorizer and leapt to her feet, pointing it threateningly at him. “I guess I’ll need this then,” she surmised, her voice going low, dangerous.

Her brother was no rookie to their games, of course, and swiftly grabbed a fresh can from the shelves behind him while still crouched in a bowlegged gunslinger pose, like her, as they stared each other down.

“I always knew it would come to this,” Sheriff Manda growled.

“Showdown at Sunset Lanes. Only one of us is going home, pardner,” Kasper the Outlaw grunted.

“Hey, kids,” greeted one of the bowling alley’s regulars, dropping a bill on the counter between the two of them, completely unphased by the siblings' antics, and walking off to pick a lane.

The sheriff used the moment to deodorize her opponent’s face.

His sister grinned brightly. “In the end, you'll never escape the law!” she called, pointing her lollipop stick at him with a wink as she jogged backwards toward the arcade machines.

This one goes out to my brothers.