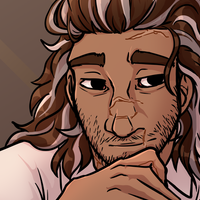 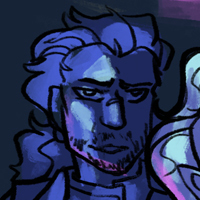 Manny joined the military as soon as he reached adulthood to get out of his orphanage, and was quickly picked out as compatible for a new pilot program involving an advanced AI. The new tech allowed a pilot to empathetically connect with the AI Turing, and with that connection, effortlessly control the fighter ships with ease. Manny was instantly attracted to Turing, and provided to be far more compatible than originally estimated. He was immediately signed onto the team, perhaps too soon.

With his newfound freedom, Manny explored the galaxy during the off time and made many friends on the planets he was tasked with protecting. During one of the final large pushes of battle, the Chaos had sent a fleet of captured and corrupted aliens to attack the pilots. Among them was Manny's friend, Static. Unable to push forwards and harm his friend, while also afraid of his team harming him, Manny disconnected unsafely from the fleet and Turing in attempt to save Static. This plan failed, and on top of it, most of the Starlight team had ended up dying in that battle, allowing the Chaos to win and start taking over most of the planets in the area. Distraught from knowing his actions caused this outcome, Manny hid himself and his ship in a far off planet, and tried to forget the entire thing.

Manny is trying to live the rest of his life in hiding but can't help but answer the endless questions that Yukira brings him, a friend he made back when he gave her some advice after a teen heartbreak. When she brings him a key she had inherited from her family, Manny panics and tries his best to turn her away from a life that will surely only result in her death. But Yukira is persistent, bringing every piece of evidence she can find to Manny to prove she knows that there's a better life out there than what they're under now. Upon seeing a forgotten picture of his last Starlight team, persuaded by her optimism, Manny cleans himself up and leads her to the ship he's kept hidden and fixed all this time. On the ship, Manny introduces her to Turing, who has become glitchy due to years of being left derelict in space. The two are unable to access the Station Base that houses the rest of the fighter ships and Turing without having all the keys, but at least they can locate them with Turings help. Despite the glitches infecting into Manny's previous scars every time he connects into the ship with Turing, the two start a quest to gather the keys and build a new Starlight Brigade.

✦ Relationships
✦ The Next Starlight Brigade

The initial flights after getting Turing up and running again were rocky, and Manny kept circling back to a fear of letting his team down when they need him the most. While Kazuya managed to talk some sense into him, he still managed to end up getting captured by CHAOS due to some leaked information about their base. During the rescue mission Glitch helps him fully regain his nerve and he promises to never leave the team again. He holds this promise true, even when Jones lets him know that the more, he connects with Turing for flight, the more his body is going to fail due to the trauma he caused to it in the past.

After the betrayal with his previous team, Owain is slow to accept Manny back, and they agree to start off with a friendship again. But there’s traces of the previous relationship occasionally popping up, whether or not either of them is ready to bring that up again. Upon meeting Glitch, Manny is instantly accepting and grateful for someone to have been with Static where he couldn’t. Kazuya and Manny seem to have a lot of conflicting opinions on… everything? But somehow that just means that Kazuya is one of the ones Manny trusts most with honest opinions and to tell him what happened when things go wrong. As they get deeper and deeper into the new war against CHAOS, Manny finds himself worrying more about Yukira, and whether he did enough to prepare her for the universe.

When Static finds a chance to go off on his own to kill off CHAOS once and for all, the Starlight team goes after to rescue him from his own suicidal mission, Manny is informed in the panic that his body can’t take another flight. He insists on going anyways, sticking to his promise to never abandon his team and being unable to live with himself if anything was to happen to Static. During the battle, after Static and Glitch are pulled away from the dangers, there’s an opportunity to end CHAOS still open at the sacrifice of a pilot. Knowing he’d never be able to sync up with Turing or his team again anyways, Manny takes that sacrifice, unable to live a life without that deep connection in it.

[REDACTED] wakes up after being rescued by a passing scavenger ship that had entered restricted airspace to make an extra meal off some black-market tech. The crew is murdered, and the ship is taken over with the infectious CHAOS powers [REDACTED] has now. Unable to recall memories or empathy for the fallen crew, as well as lacking a purpose to his life, [REDACTED] starts wandering the system looking for any answers he can hope to find.

Upon his travels [REDACTED] starts to have flashes of memories. None of them seem like his, more like he read them from a textbook. He also starts to notice a feeling of being incomplete, like something was removed from him. Seeing the members of the Starlight Brigade in passing triggers a flurry of memories, none good, and [REDACTED] comes to the conclusion it is their fault he is like this. He starts planning their downfall.

Once identifying and researching the Starlight Brigade to fill in the gaps of his memory, [REDACTED] sets out to recover some previous allies to help him, knowing he would never be able to take Starlight on his own. First, he recovers one of the clones of Isador Digby Valentine, from which he only remembers that Pilot Valentine was as excellent in mechanics as he was in flying. Due to lack of previous equipment available, as well as not being able to remember the process beyond the first set of input commands, Valentine’s resurrection was not by the books, and he was allied with something more eccentric than he’d expected. But th̨é ҉co͢m̸pa̕n̕͘y҉ ẁ͡as ̷͟g͘͞oo̵̸͟d҉̶.́҉.

After the first encounter with team Starlight, it was apparent that [REDACTED] would need more fire power if he was to have a chance against the enemy, so he hunted down one of the most passionate and desperate fighters in his memory, Paul. The original promise of power and respect was enough to easily lure him in, but after a few fights, [REDACTED] has noticed that Paul isn’t acting the same way anymore… But Paul also hasn’t left.

At one point, [REDACTED] ends up captured by the Starlight team, and thus starts the debate on whether he is related to their previous pilot, Manuel Richards. At the same time of capture, both Paul and Valentine are captured as well, and the scientist of Starlight was able to figure out Valentines’s origins. The new question was of whether [REDACTED] was a clone of the pilot sharing his likeness. Unable to get Turing close enough to have proper communication out of fear the CHAOS infection would spread, it was left to figuring out what remained of his character.

So Static gets [REDACTED] a DS and a copy of Pokemon Black. His final team ends up being Serperior, Houndoom, Trainquill, Scolipede, Hydreigon, and Rotom. Rotom is the most trained pokemon on his team, and he never has it change form.

Eventually [REDACTED] manages to escape, also breaking Valentine and Paul out. While he insists that nothing has changed except for the need to increase their efforts, Valentine and Paul have started to notice a few subtle changes since he had a chance to speak with the Starlight AI, Turing. Neither of them are quite sure what this means for their futures though.