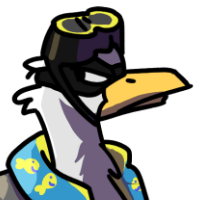 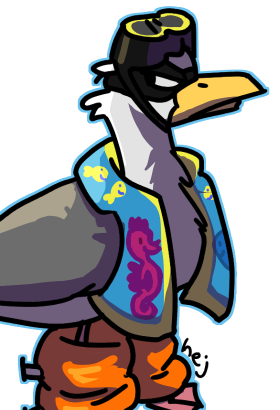 Terror of the beach.

Captain Riptide is a character I originally made up for the sake of an outdoor B-52's concert in 2009, which had a beach/nautical-themed costume contest. The concert got rained out halfway through, so nobody won, but I did look super fly in my costume made of random stuff from my basement.

(how many of my characters are based on costumes worn made of random stuff from my basement, Toyhouse? um... five...?)

Though I have since hung up the cape, a redesigned Captain Riptide now serves as Salmonman's nemesis, in the sense of being the Hamburglar to his Ronald McDonald. Technically part of the Catband universe for that reason, though as a fictional character belonging to the comic's fast food fish chain, Salmon Depot.

She (yes, she) is a seagull supervillain.

CAPTAIN RIPTIDE hates sandcastles! AND ALL OTHER BEACHY FUN. If you are building a sandcastle, watch out, because THE RIPTIDE IS COMING, AND THE RIPTIDE ALWAYS WINS. Captain Riptide wants everyone's beach days to be LOUSY and not FUN FILLED and certainly not SANDCASTLE FILLED because sandcastles send Captain Riptide into an apoplectic rage of destruction.