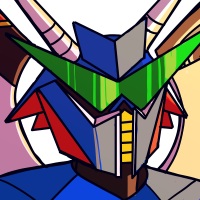 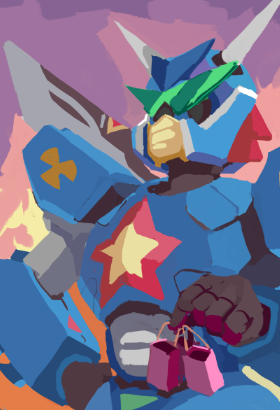 ASTROBOT is a killer robot (about 20 feet tall, sentient, not piloted-- he'd be wildly offended if you tried), a professional baseball scout, and the scourge of the local sports TV station and its employees. He wants to build the best sports league of all time in all universes, and he gets into a stompy, lasery huff when he feels disrespected. ASTROBOT is doing his best!

He presently reports from his "office", a hot dog cart out on the plaza outside the TV studio, after he punched a giant hole in the studio wall when he was upset that the baseball teams in the league didn't draft according to his recommendations. Undaunted, he continues to yell all his draft tips from his spot outside, since the insurance claim hasn't come in yet for the studio to afford to fix the wall, and nobody on security feels brave enough to try tell a laser-happy giant robot to leave.

He calls himself OSA, Official Scout ASTROBOT, but no one's exactly sure if the league actually hired him, or if he simply intimidated or lasered all the other scouts-- for that matter, neither does anyone know if he actually knows what he's doing, or if he just points what he insists are his "radar guns" at teenagers and terrifies them into performing better. But hey, if it works, it works, and there's no question ASTROBOT is the best at what he does.

ASTROBOT is egotistical, conceited, vain, and has no reason to believe he's ever wrong about anything-- who's going to tell him? He's casually and cheerfully insulting to everyone, makes no effort to remember anyone's name, and has no real respect for anyone but himself. He's disinterested or puzzled at best in frivolous matters like what living things need to live, and at worst he's what we would consider callously cruel, quick to resort to crushing or lasering all his problems away. ASTROBOT just thinks he's being efficient.

Still, he's interested in the world at large, and he feels strongly dedicated to "the people"; he wants to bring them the best baseball possible!

ASTROBOT talks about himself exclusively in the third person, yells everything or types in bold and all caps and uses way too emojis and exclamation points at all times. He speaks in a weirdly broken English with no regard for correct tense that's somewhere between English-as-a-50th-language and parenting books about What Your Teen's Text Speak Really Means. Scott Steiner is his spirit animal. 🚨🚨🚨🚨🚨🚨🚨🚨🚨🚨🚨🚨🚨🚨🚨🚨🚨🚨🚨🚨🚨🚨

ASTROBOT loves going to the mall, accessories that make him look pretty, and 1990s boy/girl bands! ❤️ Don't get between him and a sale if you value your life. And don't you dare tell him that purse doesn't match his eyes.

[In real life, ASTROBOT is a bootleg knock-off toy of Combat Mecha Xabungle, but his character has... evolved... from those beginnings to say the least, so this is an original redesign for the guy.]