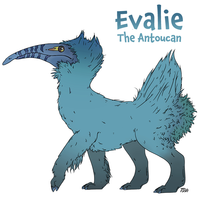 She is completely colored in shades of blue, except for small patches near her eyes that are actually iridescent scales typical to the species.

She is a quiet rainforest dweller and the current love interest of Splash, a male antoucan. She thinks he might be a little young and inexperienced for her, but admittedly, she really like his butt.

Antoucans are a species of feathered mammals, a mix between anteater and toucan.

Antoucans are covered in thick wispy feathers, except for their faces which are blue striped and the texture of soft leather. They all have iridescent patches of scales in front of large beady black eyes. Antoucans have many small saw-like teeth, but are mostly used for grasping rather than biting, and as such they are mostly insectivorous and frugivorous. Their claws are blunt, thick, and blue, and used for digging.

Female antoucans are always a shade of a single color. They tend to be on the cool side (blues, greens), and they are much more muted than males, which are showy with long tail feathers, and bright, fluffy rear ends. Males are very bright, and are found with several shades of color throughout their plumage.

Like many colorful tropical birds, males strive to catch the attention of females thorough bold displays, which includes intricate shaking of their tail fans, loud calls, and obnoxious dancing.