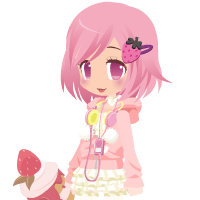 A resident of the Test Reality who found herself thrust into a higher role than she ever wanted. She awoke one day with the Oress (an orb that grants the owner magical powers) Entria, allowing her to control emotions. Unlike the others like her (soon to be known as the Oress Holders,) however, she maintained a few of her memories pre-awakening, prompting everyone to think of her as more significant than she actually was. Thus she became the de facto "leader" of the Castle Oress Alliance, expected to give them guidance throughout the death game known as the Competition.

Considering Cel is a deeply compassionate person who hates violence and screams at the slightest surprise, it should be of little surprise that it went poorly for her. Despite this, when the Competition was rebooted elsewhere again and again she kept finding herself slotted as the main character, forced to try and help complete strangers survive repeated Competitions. Still, she tries to maintain her energy, friendliness, and optimism, even when the universe refuses to give her a break.

Cel's personality depends much on the company and the situation, but there are essentially two sides to her. The first is the part that keeps getting knocked down: a bright, energetic, and optimistic girl who wants to throw fun parties and be everyone's friend. It definitely shines through and it's easy to tell that's the person she wants to be. During times of peace and around friends she can be seen always trying to keep the mood up, and she's good at making people feel welcome. It's come in handy considering how many people from different worlds end up finding their way under her roof.

On the other hand, though, Cel's self-esteem is practically nonexistent. She feels completely incapable of leadership and every time something goes wrong she blames herself for it, feeling weak and cowardly. She's afraid of conflict and wishes everyone could just get along, but in a place like the Test Reality such idealism has led to endless turmoil for her. She detests violence of any sort, preferring to talk things out or flee if necessary. Her powers over emotion could aid with this, but she lacks the confidence to use them.

Still, Cel is good at getting people on her side and will always try to help someone in need. She might flinch, scream, and run away from just about everything, but if she sees an avenue to make the world a better place then she'll take it. It's also worth noting Cel is pretty casual when it comes to the positions and powers of strangers. Endless Competitions in a multidimensional overlap zone means she's had all sorts of allies, from gods and monsters to straight-up Pokemon. She might be nervous about someone who looks sufficiently monstrous or otherwise ominous, but so long as someone proves they're an ally she'll welcome them with open arms. This can make her come off as a bit unusual to strangers, though; almighty beings and the like are so omnipresent in her life that she views them with no special reverence or awe, leading her to treat them a bit too much like everyone else.

Cel has a fixation on strawberries, loving to make "strawberry sammiches" and other strawberry-related goods despite not needing to eat. Also, the color purple gives her the heebie-jeebies. For obvious, Castle-Oress-burning-down and incinerating-every-crush-she-ever-has reasons. On that note she tends to develop crushes on people easily, though at this point she tries to avoid it considering how it usually ends for her...

In addition to the innate advantages being a Tested grants her (see the link in the summary tab,) Cel wields the Oress Entria. Entria grants the wielder the ability to control emotions and is powered by love. This is a deceptively useful weapon, particularly in the Test Reality. The Oresses are powered by emotions, so if her ally is low on the emotion they need to be at peak power Cel can change that. Likewise, she can dampen the power of enemy Oress Holders.

That, of course, doesn't even get into the fact that it's useful to give your allies the confidence to push through pain or to make your foes collapse into a heap of depression, as well as the fact that there's another emotion-related quirk behind the Oresses: Umbra Tear. Umbra is the creator of the Oresses and they're tied to her soul, meaning that her emotion levels affect the power of the Oresses as well. Thus, Cel could change Umbra's emotions and that of the Oress Holder she's targeting to quickly unlock that Oress' maximum power. For example, she could power up Fyel by enhancing Fyel's anger and decreasing Umbra's. She can even manipulate her own emotions, theoretically capable of giving herself supreme confidence.

...This, of course, is all dependent on her actually using her abilities, though. Cel lacks confidence and hesitates to use her powers at all, feeling that it's manipulative to use them even against her enemies. She also doesn't realize quite how overpowered her powers can be, though knowing would only make her feel more guilty about using them. This tends to leave her as the weakest member of the Castle Oress Alliance since she lacks any combat training, weaponry, or physical abilities that might make up for her hesitance to use her Oress.

One day, Cel awoke on the floor of an expansive building called Castle Oress with many others, each of them holding a color-coded orb. They were informed by a woman named Umbra Tear that these orbs were Oresses: a creation of hers that was the combination of her soul and that of the holder's that granted the holder a specific power. The creation process accidentally wiped out their memories, but she assured them that they would thank her later. They were in a world called the Test Reality ruled by a goddess named Opine Frazil who was planning the Competition, a battle royale death game in which the winner would become an almighty being like Opine: one of Them. Umbra took it upon herself to make the Oresses so that they would all stand a chance at winning against the superpowered Tested who were not among the Oress Holders, but warned that she was their enemy and would show them no mercy once the Competition began.

Once Umbra left, chaos ensued. The Oress Holders were conflicted, some wanting to immediately start training for the Competition while others sought to restore their memories and learn more about the situation. Eyes quickly fell on Cel, who was the only one who had any memories. The other Oress Holders simply went by the name of their respective Oress, but Cel remembered that her name was Cel. She also had foggy memories of living in a mansion, of listening to music, of eating strawberry treats... nothing helpful or all that specific, but it was the only lead the others had. This led to the Oress Holders declaring her their unofficial alliance head, but her lack of knowledge or confidence caused people to splinter off before the Competition began.

The Competition went poorly for Cel, as she lacked the initiative for the alliance to have a proper offense and the tactical knowledge to have a proper defense. The Castle Oress Alliance essentially had to lead itself with Cel being little more than a figurehead and a guilty cheerleader. She had no interest in the Competition and hated that everyone kept thrusting things upon her that she wanted no part of, and perhaps most of all she hated how long she lasted, watching everyone suffer around her while she tried to just hide from the world.

...Of course knowing her placement and cause of death would require me to have Lilesque planned out BUT ANYWAY the Competition ended, only for Opine to dump everyone into the interdimensional mess that encompasses the RPverse. New Competitions were held, with Opine often wiping everyone's memories or keeping them as she saw fit, sometimes forcing everyone back into the Test Reality and converting new participants into Tested. Each time Cel kept playing a starring role, forced to disperse the Oresses to new holders each time in order to give them a fighting chance. The plot went through all sorts of changes and retcons, but eventually Opine decided to stop erasing memories, leaving all participants aware of the capricious nature of Opine's whims and the precariousness of their situation.

There have been around 6 or 7 Competitions since the original one, and while there's been an extended time of peace Cel can't quite relax. Most of her enemies are supposedly taken care of, but one can never be sure in such a strange place as Interrobang. It doesn't help that she keeps finding herself thrown into all sorts of random threads- uh, I mean, situations- that tend to go comedically badly for her. Many of her allies have drifted apart over the years as well and no longer use Castle Oress as their home like they did during the Competitions, leaving her a bit lonely and unsure of what to do from here. She always wanted peace, but life without the Competition is something she's never really had. Is it even worth it trying to do something with her life, knowing another Competition is most certainly waiting on the horizon to destroy it all again?

If she knew what was really ahead of her, though, she'd cherish the now before the future comes.