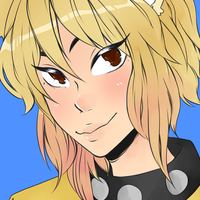 As old as Entirety itself.

May 20th... though she just picked that out herself.

An abstract concept, but also a human or a catgirl or a catball. Depends!

Somewhere between 2005 and 2007. No later than May 20th, 2007, but probably a bit earlier than that. She was originally a Paper Mario: The Thousand Year Door fan-character based on Ms. Mowz, so...

Larya is extraordinarily carefree and adventurous. She lives in the moment and only for herself, seeking out misadventures wherever she can. The more dangerous something is the more likely she is to get involved, especially if there's a reward waiting at the end. She's a huge troublemaker, especially when there's money to be gained! Needless to say, her morals are... well, she doesn't have money.

Despite all of her mischief, Larya's relatively friendly and gets along well with people who are as extroverted and hectic as she is. She likes exchanging witty banter with her enemies with people she steals from, and if they asked she'd be cool with hanging out and going golfing or go-karting or something.

She doesn't come off as very intelligent, but in reality she's extremely clever and has a serious side that seldom makes itself known - at least to anyone who'll be able to remember it. She is, after all, among the most powerful beings in Entirety! She just doesn't really like to act like it. Not much fun, you know? She likes cheating, but not to the point where everything's easy.

Upon the creation of Entirety, two beings were automatically created: Time and Space.

Pretty much immediately they both abandoned any sense of superiority or responsibility and went to go fuck around and do whatever they wanted!

This describes the life of Time pretty well, henceforth known as Larya Tayl. Free to do whatever her heart desired for as long Entirety would last - so for eternity, if she had any say in it - Larya immediately embarked upon many an adventure. She made friends, she made enemies, and most importantly she fell in love with money. Excuse me, monies~. It's an important term to remember.

There's not much else to her past than that. She got involved with the Test Reality a bit, sure, but that was never really her story.

Larya has two forms: Larya and Tayl. As Larya she takes the form of a human female somewhere in her 20s with short blonde hair and red eyes. Her outfits vary, though she tends to stick to a color scheme of orange, yellow, and black. Sometimes she has cat ears and a tail, sometimes she doesn't. Who knows! She's never really had a solid design! Nice! As Tayl she takes the form of some weird cat-Kirby thing. Tayl is a big round orange ball with yellow shoes, a yellow mask, red eyes, a big mass of fluffy yellow fur on her head, cat ears, and a long tail with a four-pointed yellow star on the end. Sometimes five. Who needs a consistent character design????

Aside from the whole being-an-almighty-being-beyond-Entirety deal and the whole time manipulation thing (she doesn't take advantage of these traits as it would make everything unbalanced, unfair, and unfun), Larya is very quick and agile in either form.

In either form she can use her long, prehensile tail to attack and can also grow claws. She prefers to use her Star Gun, however: a very fake looking gun that fires cartoony-looking stars a la the SSB Star Rod.

Of course, Larya is what happens when you put all your points in speed and luck and neglect every other category. Her attack power is relatively meager and her defenses and HP are utterly pathetic. If you can manage to hit her then it won't take long for her to go down.