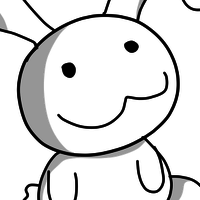 As old as Entirety itself. :3

No one was keeping track of that when Entirety was created! But whenever I need to I'll put it down as August 3rd, because 8/3 is pretty close to :3. :3

Huge jerks who hate everyone, bad service, people who don't respect the boundaries of others, anyone who's mean to kids... but not really much else. He likes most things! :3

Popping up out of nowhere and just chilling with people. :3

Bunny is a carefree and lovable spirit. Bunny goes where Bunny goes, feeling no loyalty to any one land or group. Bunny simply is... :3

Bunny likes going on adventures and getting involved with the wacky antics of others. He might even seem to be in multiple places at once just so he can maximize his fun! His morals are pretty relaxed, and historically he's been involved with both heroes and feelings alike. There's just something about him that makes it impossible for people not to love him... to be fair, he is a pretty friendly rabbit! He likes to just kind of bro it out with people, make pals, believe in everyone around him, and hang out whenever a certain spot seems to get lonely. He's a cool guy, and super chill all the time! Has he ever been angry? :3

So mysterious, though... why doesn't his expression ever change? Why is there always a :3 at the end of all of his lines, spoken or otherwise? We may never know. :3

Like Larya - Time - Bunny too has existed since the moment Entirety came into being. Bunny is Space: in other words, he is the very concept of place. Everything ever is Bunny, except like Time because that's Larya, and Empathy because that's Ara. Like the other Superior Beings, though, very few people are aware that Bunny is anything more than a strange little talking rabbit... though some people tend to speculate he's some kind of higher being anyway due to the many mysteries surrounding him and his omnipresence. :3

Bunny wanders around wherever he pleases, though he's spent a lot of time these days hanging out in the Test Reality and the places it's wound up becoming connected to. He hangs out with both the "villains" and the "heroes" alike and is always welcomed by both. It's a good time for everyone! He's like a cheerful little mascot that keeps everyone going even when the crushing despair of being forced to kill friend and foe alike becomes a bit much. :3

Bunny's powers are boundless. Fear him. :3