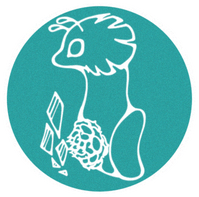 Older teen during transformation, been Esk for roughly 50 years

Gender- and sexless, though seems more masculine than feminine Just Poe is a timid Esk who doesn't really have the courage to go around correcting how others decide to call him, which is where his peculiar full name comes from. He originally chose the name "Poe" for himself, as it reminded him of something from his past life, but his humble way of introducing himself often as "just Poe" eventually got turned into a permanent moniker. The Esk is equally shy about things like pronouns, but if someone went through the trouble of actually asking his preferences on the matter, they would find out that "he" is what Poe likes to apply to himself. Nowadays he doesn't really have a strict gender identity of any sort, but he feels like the pronoun is still the most appropriate one because he has a faint recollection of being a man before his transformation wiped most of his memories away.

The first impression of Poe's personality is usually that he is a clumsy, constantly babbling bunch of nerves, and that isn't exactly wrong. It is incredibly easy to make him agitated and even easier to notice when that happens. That is both because of his frilly fur that tends to puff out whenever he is stressed out as well as his enchantment that starts to grow in size whenever he is under threat, no matter if the threat is real or something made up by his anxiety. The cherry on top of this messy cake is Poe's method of countering his fears by talking - and he talks a lot. He talks quietly to himself when he is alone, he talks about everything and anything when he is in company of others and if he is ordered to shut up, he looks like he is about to explode from the words he has to hold in. All this is often enough to scare away other creatures pretty quickly, which on one hand lets Poe retreat to recover from his panic in peace, but on the other hand makes his life pretty lonely. And even if others can be weirded out by his behavior, Poe himself is his own worst critic: he is deeply ashamed of his anxiety and how it makes him behave. He also hates the fact that the memories of his life before turning into Esk have been locked away almost completely. The situation makes him feel incomplete, like he doesn't know who he is supposed to be and especially what is he supposed to achieve in his afterlife. It has also given him a fear of losing his newer memories, too, which is why he tends to leave himself tiny messages all around his boundary: a stone circle to mark his haunt, arrows made out of sticks to mark his way back home, even things like written words on the sandy shore to remind about a good spot to watch the sunset from. After all if memories can be stripped away just like that once, who even knows how easily it might happen for the second time?

By appearance Poe is a middle-sized Esk with somewhat elongated but soft features. Most of his fur is rather short, but there are some longer strands that frame his head, tail and legs. The frill-like fur around his head and tail can be spread out, while the tufts above his paws remind pant legs a little bit. There are also two short antennae protruding from his forehead. The Esk's big, round eyes glow faintly in the same shade of light blue as his enchantment called Guarded heart. It takes the form of a few floating, translucent shards that normally reside in front of Poe's chest. Whenever the enchantment detects some sort of threat in the environment, the shards grow and multiply and eventually form a solid shield in front of its bearer's body. Despite looking like glass, the shield doesn't break by any normal means and is impenetrable by most things (exception being even stronger supernatural powers). The light color of the shards and the eyes is in stark contrast to the rest of Poe's body, which is mostly black with some grayish blue stripes and a hint of desaturated purple in the muzzle. The Esk's nature feature, Chalk dudleya, on the other hand is also rather pale in color. It is a large, round-shaped succulent that grows just behind the enchantment shards.

Like already said, Poe doesn't remember almost anything from his past life. In reality he was an artistic young man who had recently moved away from his childhood home to study in another city. He and some of his close friends decided to put together a community in order to split the expenses of living on their own as well as just have fun time together. It all worked out very nicely - for a while. Eventually living together started to strain the friendships more than the youngsters had anticipated and the atmosphere of the household turned sour. In the end others asked Poe to move out without explaining what exactly he had done wrong to get kicked out first. Being cast out like that by people he had loved and trusted was devastating to Poe, who immediately ran away in panic. He didn't know how he could ever go back to even fetch his belongings, so he kept wandering around aimlessly for some days before he ended up into the shore of the Everglades. He sat on a small hill and wept in his misery until an Esk found him and offered him a way out. Poe took the offer, was transformed and parted ways with the painful memories of his life as a human.