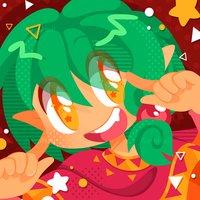 "Let me know when you get there safely!"

● Asher is a super upbeat and positive influence to those around him. He appears to have a very comforting aura and he certainly uses that to his advantage, befriending anyone and everyone he can.

● Is very skilled with magic but struggles with broom riding, unlike his sister.

● Smiles a lot but also worries a lot.

Asher has golden, verging on orange skin and medium pointed ears. He has orange eyes and bright green hair that is medium in length. He has a longer section of hair that he keeps a ceremonial bead on. He has large canines.

On his home planet and universe Asher was next in line to the Miracan throne, followed by his sister, Kali.

When he was 10 he was tasked with looking after an alien human called Damian that has been sent to their planet for his own safety. Asher was fascinated with Dam and quickly became infatuated with him despite Dam showing no interest in Asher's existence. Over time the two became friends after becoming sparring partners but Dam went missing 5 years after he arrived in the palace.

Asher launched planet wide search parties for him but he was never found which broke Asher's heart.

Due to the palace being taken over by a rival species he and his sister were evacuated using ancient technology that burst a hole through the barrier between universes.

They arrived on Base planet when he was 17. Because of their unusual situation they were given sanctuary on Base in exchange for any information about their original universe. People coming from different universes is considered very rare so it was a very unique opportunity for the Data Collectors on Base.

Asher loves his sister with his whole being. She's his last remaining link to their home planet. As a result he can be a little soft with her when she gets up to no good. ...usually he's the one helping her get up to said no good.

Asher was instantly protective of Jessie when he arrived at Base. He was smol and afraid and utterly lost, much like he and his sister had been when they both arrived on Base 7 years previous.

Over time with the help of his sister Jessie started to come out his shell and Asher found him self smitten with him much to his own alarm as he knew Jessie was not interested in relationships.

Asher and Damian were friends for 5 years when they were younger but to Asher, Dam seemed to just disappear but what really happened is Dam found the technology hidden in the depths of the library that he needed to universe hop.

When they encountered each other later in life Asher went through 40 different emotions all at once but then was hurt when Damian expressed he didnt want anything to do with him as he was a very different person to what he had been back then.