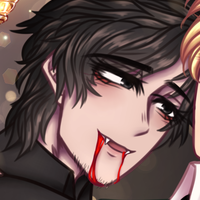 Kelga's profile is a WIP!

”That was certainly...unexpected. Or maybe it was—I wouldn’t know.” -Kelga

Born in Missouri during 1823 and died along the Nevada-Border during 1853. Expecting to enjoy a late night tryst with a vampire that had been his traveling companion along the California Trail, Kelga’s trip came to an abrupt and violent end when the vampire turned on him for refusing to further their relationship to a romantic one..

That night, Kelga would become a vampire and commit a murder himself to satisify his first thirst. Kelga would stay with the vampire that turned him, and they would leave behind the rest of their traveling companions to finish out the trip. The two of them would later settle together in the newly founded Sacramento City.

Eventually, they’d move to San Francisco, where Kelga would meet and take up permanent residence with James.


Devil-may-care as can be, Kelga is impulsive, reckless, and bores quickly. He’s not the type to think much before committing to an action because he thinks, no matter the outcome, things will find a way to work out in the end… whether that be for better or worse. He sees it as a problem for the future, not worth worrying about in the present.

While “charismatic” is not a word many would use to describe him, Kelga is willing to strike up a conversation with anyone. With a bad habit for inappropriately timed jokes and saying whatever comes to mind, he’s acquired the ability to smooth talk himself (at least somewhat) successfully out of situations.

When things go wrong, Kelga is the first to shrug things off as “not a big deal.” His attention shifts quickly, and he doesn’t spend much time thinking about inconveniences or problems. If something seems “too hard” or “too boring,” he’ll resist it in favor of doing something more enjoyable. Undead or not, he sees life as something to be enjoyed. The unpleasant things can be dealt with later… he’s got eternity to deal with it, after all.