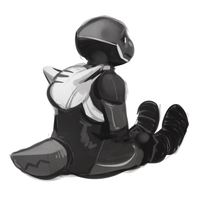 As a kid with such chaotic parenthood would, Kraz is bound to mischief. He dreams of power every single night.

For now Kraz's life has been short but eventful. With his main parent being a renowned deserter, he's been the easy target #1 of unscrupulous headhunters trying to get to his mother. Bounced around from dirty spaceports to grimy criminal operating bases, he has been with her 24/7 since she's had him, resulting in a very strong bond but a dependance on both sides.

Fortunately Kraz is not a shy kid intimidated by all of this—he has a big temper and ego and knows not only how to defend himself, but how to get what he wants. He's extremely assertive for someone his age due partly to his education and partly from his genes.

Now that he's a little older Pénurie and him tend to stick to Earth more, where life is thankfully a little less eventful and they can concentrate on themselves. He's actually been bored enough to accept the proximity of another child (not that Patatashi gave him much of a choice by always sticking with him whenever she could). Kraz was never envious of people with siblings—the concept of sharing his mother with anyone is revolting and very upsetting to him. Unconsciously however, he's been lacking the childishness Patatashi exudes in tremendous quantity, and despite not wanting her close to his mom, he does need her as a sister to play around with. Kraz ended up being as protective of Patatashi as he is of Pénurie.

Kraz is only 8 years old but his personality so far seems to be imitating whatever his mother does. He’s vain, disgusted by a lot of things (especially when he doesn’t know them), and overall quite mean. It’s all amplified by how unaware he is of certain social cues since he is a child, and Pénurie doesn’t do anything to make him less rude.

He is entertaining to be around but a real nightmare to have as a child. A real tantrum master turning the slightest act into a full dramatic event. Again, something he copied from his drama queen of a mother.

Deep down however, he has his own qualities: Kraz is very loyal and dedicated, curious (although his general distrust of everything does not allow for much of that) and most of all, he believes in justice and fairness. Qualities Pénurie desperately tries to teach out of him but it’s almost as if it’s in his genetics. It is only under Sworm’s care that he will fully embrace them however, as they share the same thrive to protect and provide for the ones they love. He also has the optimism of a kid, despite what his life has been like so far.

He will grow to be a medic or background strategist

Kraz’s body will hold 450 years before he needs a new cyborg one, courtesy of the Orc & Human’s genes

Has an unexploited artistic streak

Kraz’s energetic signature almost perfectly matches his mother’s, making his parentage really easy to guess to anyone who can read/see it