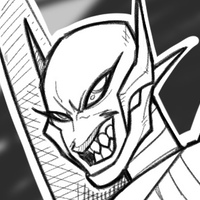 Deserter of her own worlds-conquering-army, she's stuck on Earth for a little while with a whole new challenge she didn't anticipate. Sure, when you've lived 9,000 years you can handle pretty much anything.

A child, though? Well that's just a whole new conquest on its own, really.

TLDR: she’s an alien parasite on the run currently trying to be the best mom possible considering the circumstances.

She’s an individualist, opportunistic, paranoiac, true maniac and materialistic brat convinced that the strong kill the weak. So when she (rather unfortunately) ended up with a kid on Earth, she taught him how to be strong and how to fight without an ounce of hesitation. Considering her situation and beliefs, it was her safest bet to ensure his safety.

Pénurie‘s slowly learning what it’s like to care for somebody else and to have to put someone’s best interests before yours—quite the shock, but she’s doing her best!

Success story is what others would assume happened to her, the meek-survivor-turned-bad-gladiator-turned-queen-of-the-pit story, which would explain the ascend of her disastrous temper and lunatic personality, but it's far from what happened. Pénurie, wether it is code malfunction or not, has always been deranged. As soon as she was sold to the arena by whoever caught her somewhere, she absolutely anhiliated all concurrence and wannabe directors, claiming everything as hers and rightfully eliminating weaklings in the pit.

Assasinating the past director, she used her cunningness to exploit, steal, kidnap and dispose of everyone else she did not like until she ruled the entirety of the gladiator scene for herself. A true perfect playfield she ran for centuries.

second-in-command of the sworm ➤ deserter

After centuries spent conquering with her army, Pénurie deserted what she spent years working on for a variety of complicated reasons, most of them related to her relationship with her direct (ex-)leader, Sworm.

Never one to capitulate or give up, Pénurie decided to take refuge on Earth from the revengeful wanted notices Sworm put on her head.

solar system mercenary ➤ back in the ranks

Pénurie and Kraz got separated by the local space police showing up one day in a space port. The police was informed one of Sworm’s ship was on the way to collect data and eliminate enemies within the area and wanted to catch these info/people before the Warlord's soldiers put their hands on them.

Mother and son got separated here, meaning for their very first confrontation, Kraz was alone in front of Sworm and had to convince her to help him (the main reason Sworm accepted had nothing to do with Kraz's arguments and more with the fact he was the perfect tool to lure Pénurie back and trap her herself).

SWORM  let’s not mention her — (ex-)commander

If Lambda is Sworm's most trusted counselor, Pénurie is the least devoted soldier within the ranks. Keep your allies close... and your enemies even closer.

(Or, what pure passion without any restraint leads to.)

KRAZT who knew there was a soul worth dying for (well, I made it) — son

Pénurie and her son are very close in their own way. She does not separate from him at all during her time on the run: the only moments when they're not together in the same room or area are very few and sparse. Although they fight a lot because they both have big tempers, Pénurie's main focus has and always will be Kraz's protection and making sure he'd be able to survive on his own if she disappeared.

By luck, they have the same personalities, meaning their objectives align: getting Kraz stronger, survive together, make it through another day. Pénurie is very demanding and places high expectations on Kraz but that is how he thrives and what encourages him to get better. They work well together and have quite the bond, to say the least, so even if most of their interactions are harsh and snippy, they trust and rely on each other immensely. Pénurie, in all her lifetime, has actually never cared or loved someone to this degree.

Of course this all comes with a disastrous codependency for both parties, where Kraz can not bring himself to fall asleep without his mother's presence, and her being unable to take her eyes off him even in a very chill situation. She’s very subtle about it, and the way she talks about and to her son would make you think she does not care, whereas his struggles with this are a little more obvious. He’s still very young, but they both keep face really well.

Very much like a mother panther will be harsh on her babies to teach them survival, it's her lone presence and power that provide Kraz some kind of a comfort.

Kraz follows her around flawlessly and only argues her choices when he knows it’s not immediate danger. Otherwise he complies and she leads them from port to port in order to survive.

As surprising as it may seems, Pénurie's abrasive personnality is not an obstacle to their relationship. As the two most eloquent of their team, their clashes and arguments are legendary, and Virzon is known to be able to change Pénurie's mind with her patience and impeccable composure.

Mutual respect is still too strong a word to describe their relationship, but Virzon is grateful, for without Pénurie's harsh behavior and strict (some would even say cruel) rules towards drug usage, she would not have been able to pull through the worst of her withdrawal phases. Where Scuttle and Gasher can be sappy at times, Pénurie shows no mercy for weakness, meaning Virzon had no choice but to submit this part of her in order to fit in with the squad. Ultimately, it is what saved her from her demons, even though it came with blood and tears caused by Pénurie's absolute lack of empathy for her case.

Virzon repays her leader with faultless (but not blindless) obedience.

Ultimately Gasher's loyalty lies with Pénurie more than it does with Sworm. He's reliant on her guidance and decisions. She offers the lead he needs and in return, Gasher's presence and sensibleness bring Pénurie a semblance of stability in her very chaotic mindset.

They rarely argue even when she treats him like trash: her insults and haughtiness flow like water over Gasher's back. He never retaliates and only defend his views when something big is on the line and about to deconstruct his routines.

When they're together is when Pénurie is the most relaxed ; unconsciously helped by Gasher's pragmatism. He appreciates those rare, quiet moments very much for what they are, but as it's often an hassle to ground Pénurie down, he nevers bothers seeking them out.

Even if Pénurie is often seen treating Gasher like trash, she will not accept people insulting him. Her cold schemes and capacity for petty vengeance, coupled with her unpredictability, make others wary of messing with him.

LAMBDA ex-Third-in-command
To say these two's relationship is strained is a vaste understatement, as their rivalry and strife of each other is well know within the ranks. What's no surprise however, is the fact this animosity majorly comes from Pénurie's end. Wether it is a form of jealousy or not, she has a tendency to disregard almost all of Lambda's suggestions just by principle. Fortunately for Lambda, they're backed up by Sworm most of the time.
Which is probably where the contention came from in the first place; competition over Sworm's approval, neither willing to relenquish it to the other. To be quite fair, Lambda is a deceitful liar, and they often sneakily twist matters to their advantages, gleefully snatching them from Pénurie. Where Pénurie is straight-forward in her jeopardizing of their plans, Lambda is the indirect work-in-the-dark kind, allowing them to keep their neutral facade in the eyes of others.
Ah, but these are simply soldier's rumors based on tittle-tattle... Who knows what's true?
DENANCE "associate" during her run
TBA.
VARIOUS (EX-)SOLDIERS (ex-)underlings

Pénurie is a feared commander and like the rest of the commanding trio, this respect was earned by force and proof of her might. Although she's physically the weakest of the three, her unpredictable inclination for destruction and incredible thrive for revenge typically keep underlings from challenging her position. She's still considered an anomaly in the commanding chain hoewever, mostly due to her undisciplined personality. Some soldiers do not see the point of keeping an always ready-to-blow bomb like her as a commander, but there are strategic reasonings behind this choice. The most confident ones have tried to usurp her place. None of them are still alive.

This means however, that she has the highest defiance ratio of the three, but no one beats her at the power game in the long run—and truth be told, no one else has the courage and will power to stay Sworm's right-hand for centuries either.