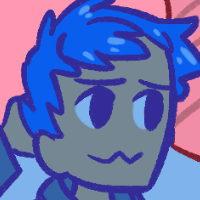 Bane thinks about some things while helping patch the squat's roof.

They were fixing a patch on the roof of the brownstone, and between the former Marine and the competitive cyclist, Bane had never felt more noodly. Kaji would get on his case if he said that, though-- Kaji had always been good about trying to make him feel like a useful member of society. And so here was Bane, on the patchy old roof, standing around holding a bucket while the big boys did the real work, shading his eyes from the baking summer sun.

They couldn't be up here too long-- if someone noticed them from the street and decided to call the police, it would endanger the squat. But he liked it up here-- he was so used to dirty subway tunnels and the darkened squat and life too close to the ground that four storeys up felt like he was in the clouds. He could see above the treetops, the rooftops, the dogs in the backyards below. He felt like he could breathe up here.

He also wasn't paying any attention.

Kaji had approached him at some point, because Bane jumped when the old punk was suddenly in front of him, smiling.

"Could I borrow that, or were you planning on holding that hostage all day?"

Bane gripped the bucket of tar with an easy grin. "Oh, I've gone capitalist. The collectivist dream was nice, but you know how it is: they lure you in with promises of picket fences and two-car garages, and suddenly you're fleecing your friends over nails and buckets of tar. It's a slippery slope, Kaji: I'm afraid by this time next year I'll be a construction tycoon in Staten Island with a beer belly, mob connections, and I'll have changed my name to Sal."

Kaji laughed. "I'm pretty sure there's an Irish mob too."

Bane pretended to think about it. "Nah, 'Devlin' isn't a good name for the side of a van." He spread out his hand as if he was picturing the siding on his imaginary truck. "No, I have to be a Sal or a Big Tony or something like that. Maybe even a Junior."

"Of course, the new capitalist you has to be as marketable as possible," Kaji approved, ruffling Bane's blue hair as they started walking over to where Lance had the spot ready to patch.

"What are you two on about?" Lance wondered with a suspicious smile.

"Oh, just my new life as a mobster. You can get in on the ground floor on this, my friend!" Bane said with a grin and as much of a flourish of the bucket as his skinny arms allowed.

But after they were done with the roof, Bane stopped Kaji before he could follow Lance down the fire escape. "Hey, Kaji?"

"Just--" They stood there for a moment at the back of the roof, Bane staring north into the hazy city as Kaji let him think. The skyscrapers in Manhattan shimmered like a mirage in the heat. Millions of tiny people moved in a space Bane could hold inside of his hands if he held them out in front of him. His eyes finally skimmed over to Lady Liberty off to the west, eternally waving toward Brooklyn, a comforting beacon not only to ships but always to his busy mind.

"Would it be wrong to want that?"

Kaji turned and looked at him like he had three eyes. "To be a crooked contractor named Sal? Far be it from me to judge--"

"No no, none of that. Just-- the picket fence. The happy family." He couldn't say the rest, but it was there. The peace of never having to worry about your next meal, a pillow below your head, or a roof above it.

Kaji wrapped his elbow around Bane's neck in a tight little hug. "Of course not."