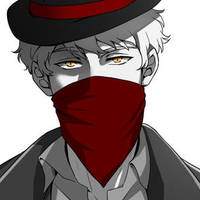 Jackson stared wistfully into an endless abyss. Where was he? Was this death? He felt so light.
"You have been through so much."
It was a warm voice that came from every direction.
"Who...?"
"I've watched you. I've watched the smile you wear despite the pain, the amount you ran despite your exhaustion, the kindness you show despite your choices. You are a hero among men, and to see your life be taken away so soon is nothing more than heartbreaking."
He could see a light, the same one that enveloped him back then. He narrowed his eyes.
"I can give you back your life. I can make you stronger than ever- happier than ever. Please allow me to grant you the life you deserve."
He could finally see past the light to see the man behind it- man with white hair and golden eyes. He sat besides him with a look of regret and sadness as he offered him another chance. A chance to be happy, a chance to come back.
Weakly Jackson nodded, and the man gave him a warm smile.
"Good. Then let me take away those that hinder you."
His eyes glowed, and in that moment the warmth Jackson felt suddenly turned into a chill.

The Master Thief has returned, but he's no longer the same. The proud, stainless white that accompanied his uniform was now a deathly dark, and the eyes filled with life now held a hateful glower.
He no longer performed, he no longer cared.
He was a thief - he was the thief.
He was the Master Thief.
And he was done playing.

Nicknames: Jackson, but only if you actually know who he is. Most likely won't respond either way.

Personality: Once joyful and kind, Jackson has become cruel, cold, and apathetic. He does not stay for idle chatter, focusing solely on stealing. The rules he so proudly followed now no longer apply, and no matter how close you were to him before he won't hesitate to point his gun at you.

Drawing Details: His uniform consists of: a black hat with a red banner and feather; a red shirt and scarf that covers his mouth and nose, and a black ensemble of a cape, vest, slacks, gloves, and shoes. Very important details are his gloves, scarf/mask, golden eyes, and apathetic glare.