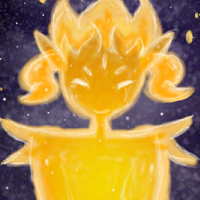 Some manner of energy being.

Monaz doesn't have enough of an understanding of romance and sexuality to define xyr feelings.

Those who bring harm to others for no reason, closed souls, getting caught, awkward silences, hurting others, letting people down.

What Kind of Pokemon Are You?

Xe can change the temperature of xyr body and is airy to the touch.

Monaz is very relaxed, carefree, and friendly. Xe enjoys talking to others and learning about the human experience, which xe doesn't entirely understand. Gets xemself into trouble often but doesn't mind it. Seldom negatively judges people, even those who wrong xem. Anyone who gets on xyr bad side has worked hard to earn it. Xe has a relaxing aura about xemself that may or may not be supernatural in origin.

Long ago, Monaz befriended All-Conquering Overlord Hadris Torant and became one of his Representatives: one of his most powerful and trusted associates. Xe joined out of curiosity, and hoped by following Hadris throughout Entirety xe would be able to learn more wherever xe went. Xyr curiosity rubbed off on Hadris, and together the two softened and became invested in the lives and well-being of lower beings.

After numerous devastating attacks from a wronged goddess named Memen, Monaz began to doubt xyr place in Hadris' organization. Xe had little in the way of offensive capabilities and, while useful for gathering intelligence, xe just couldn't do anything to save anyone. Overwhelmed with guilt, xe resigned and assured Hadris that none of this was his fault... xe just needed some time alone to think. Maybe xe would be back someday.

Xe began traveling from planet to planet, dimension to dimension, Reality to Reality, silently people-watching and learning how lower beings functioned. Eventually xe got in trouble with the Space Police; due to xyr habit of eavesdropping on interesting people with xyr powers, xe knows an incredible amount of classified information and has more enemies than xe even knows about.

Upon becoming aware of the Space Police's intent to arrest xem, Monaz began traveling at a quicker rate and found xemself on Earth in the dorm of a girl named Chalcedony Lepidolite. Noticing the openness of her soul, Monaz decided to ask permission to move in, so to speak, taking up residence in her frilly outfits to cover up xyr vibe with hers. Xe's currently assisting Chalcedony in both her studies and her investigation into her roommate's disappearance, using xyr abilities for her so long as she allows xem shelter.

Xyr shapeshifting abilities are bizarrely limited to clothing. Monaz has the ability to possess clothing, change the appearance of clothing, and transform into clothing. Xe can also can read soul signatures and evaluate much about a person by examining their soul. Can change xyr shape and is capable of flight and becoming incorporeal. Has little to no difficulty traveling to other planets or dimensions in a blink of an eye.

Xyr vibe is powerful and obvious to anyone capable of sensing such things, hence why xe needs to rely on hiding behind someone else's vibe. Has no offensive capabilities, though xe is capable of feeding off of life energy and devouring souls. Not that xe would, though... for the most part...