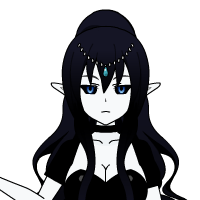 Due to the nature of Hell College, there's a lot of injury and death about. None of it is terribly gristly, though, and any particularly detailed content will be appropriately warned.

Pleroma in Blue is a fairly blunt view into the mind of an all-devouring monster who struggles with their impulses and fixation on a solitary person they know nothing about. There are a lot of sexual allusions and Some Stuff will definitely happen at least off-screen. The narrative is extremely up-front about Istra's feelings and their often negative feelings toward those feelings. It's an uncomfortable psychoanalysis of a really weird, terrified character who's struggling to find their identity, find their place in life, and become a healthy and satisfied person.

Again, anything explicit (probably not much happening on that front) will be appropriately warned for. The maturity rating might get bumped up if violence/sexuality starts coming up enough to warrant it, but for the time being I think things are fine as-is!

In another Entirety, instead of being a spoiled world-devourer with a god complex Istra has limited memories and no connections. Living more like a beast than a person, their world is turned upside down when they meet Dicro. They feel a connection to him, equally desiring to be near him and devour him. Now unsure of their place in the world and afraid of the impulses within them, they brave Hell College's campus in search of answers: about Dicro, about themself, and about what comes next. (2018)