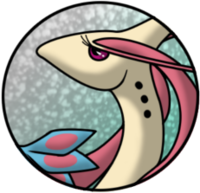 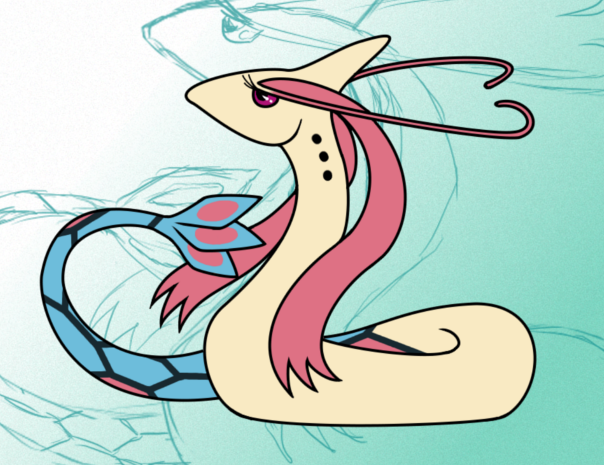 Calypso is a five meters long sea serpent, meaning she's smaller than average Milotic. She also has only three fins at her tail tip instead of normal four. Both of these things are likely result of her very early evolution. Her eyes are reddish purple.

Calypso comes from the clear rivers of Lemidae. She managed to live there only for the few first weeks of her life until she got lost from her Feebas school and joined a Magikarp school instead. From there she was soon caught by a fisherman, who then again sold the fish for a trainer, Reliam. Thanks to her living among Magikarp she was actually sold as a shiny carp and Reliam didn't have any idea of her true species until one day she was bumped into touching a Prism Scale, which triggered her evolution. The trainer wasn't all that happy about the surprise, as he had expected to get a fierce Gyarados but got a girly-colored sea snake instead. However the fisherman she was bought from was nowhere to be found anymore, so the Milotic ended up staying in the party.

At first Calypso was a very timid fighter. Slowly but surely she did gain more confidence over time, but she didn't manage to develop any sort of real passion towards battling and Reliam ended up using her more in Pokémon Contests than anywhere else. On the other hand the Milotic did have some passionate feelings towards other Pokémon, especially Bron the Salamence. When the two as well as their trainer had grown up Bron and Calypso even started to pop out a decent amounts of eggs every spring, which meant a lot of work but also some extra money for Reliam's family.