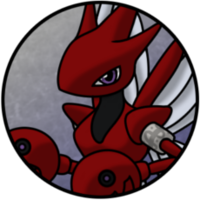 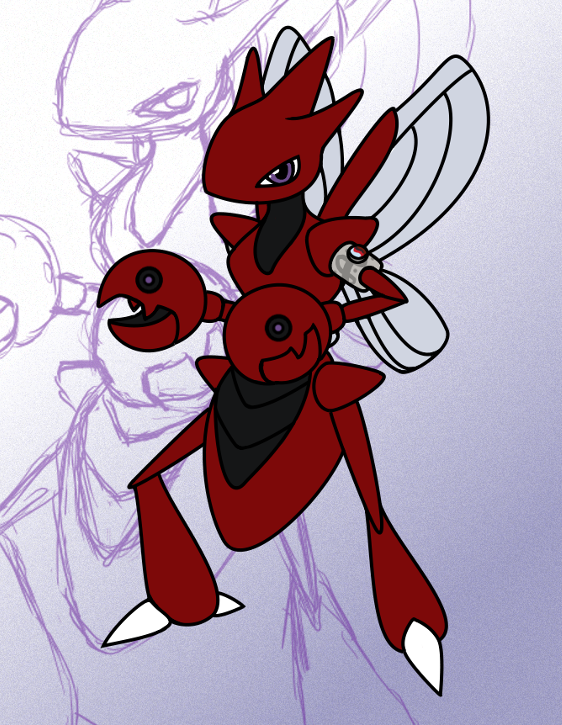 Mature, calm, observant, righteous, protective. Doesn't trust her trainer all that much.

Saramu is a two meters tall steel mantis. Her eyes as well as the fake eyes in her claws are purple colored. She has two Relic Bands (with Scizorite embedded in them) around her arms.

Saramu was born in Johto's National Park, from where she was caught by a trainer named Saga, who was participating the local bug catching contest. After owning her new Scyther for a while Saga realized she didn't have enough time to properly start training the bug, so she sent it to her uncle Caspar. Uncle, who also happened to be Reliam's father, gave the Pokémon for his son and asked it to keep the reckless youngster safe. Doing as it was told Saramu traveled with Reliam through countless adventures, even though there was always some friction between the trainer and his first Pokémon. At start Reliam didn't really appreciate the creature that he though to be as useless as any little bug, and Saramu on the other hand didn't trust her inexperienced trainer at all. Along the road things did change - just like Saramu changed her form from Scyther to Scizor and much later even to Mega Scizor - but it took a lot of time and effort from both parties.

For the longest time there wasn't really any other Pokémon in Reliam's team that would've became all that close with the serious insect, as most of her team mates were much younger and more lively than she was. Finally it was an older Pangoro Madara who started to befriend the Scizor and who Saramu could eventually consider to be her best friend. The Scizor also became very attached to Reliam's two daughters Miranda and Marilyn. Sadly, when the girls were turning into young adults, Saramu's own life ended because of her old age. She slept away peacefully, surrounded by the team she had spent most of her long life with.