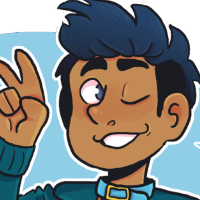 Heto tries to get Bane to help him out.

"Ba~ne," Heto singsonged, leaning his elbows on the table with a winning smile and fluttering eyelashes.

"No," Bane returned immediately, without even looking up.

Bane looked up from the sandwich he was making, licking peanut butter off his hand. "I know you," he said with a smile that he couldn't help, pointing with the butter knife. "That tone never means anything good."

Heto rolled his eyes at that and ignored him, pressing on. "Look, I promise it's not illegal this time, OK? Just bring your buckets, set 'em up next to me, make some money."

Bane laughed incredulously. "Oh, you want to hear me drum now??" He turned to the other side of the apartment and called out, "Luke, what does he want?"

"You know what he wants!"

Heto let out a huge sigh like he was the one suffering here, sinking down onto his elbows and resting his face on them, trying to look innocent as he peered up at Bane sideways. "I figured you could watch my stall for a bit. Papa's got things to do, alright?"

Bane bit into the sandwich, eyeing the 19-year-old with amused eyes. "Who's 'papa'? You?"

Heto picked up some napkins and made it rain. "Sure. Come to papa, cashola. And it can come to you too," he said, stuffing napkins in Bane's jeans like he was a stripper.

"He's not going for it, Heto!" Luke called from his makeshift darkroom in the squat.

"What do you want to bet on it?" Heto called back, having stolen the jar of peanut butter and licking some off the knife.

"Why are you two always betting on my life?" Bane asked, trying to sound less fond than he felt, fishing one of the napkins out of his pants to use it.

"You can have the rest of this peanut butter jar if you're right," Heto offered, scooping a huge amount out with the knife.

"Heto, that belongs to everyone," Kaji called back, with the sort of half-hearted authoritative tone that said he already knew he'd lost that battle.

"Fine, fine, I'll come with you, you blue doofus." Heto popped up eagerly. "But I get a cut of your sales if you make me watch your booth all day."

"Deal, my friend," he agreed immediately, holding out a hand to shake. "But who are you of all people calling a blue doofus?"