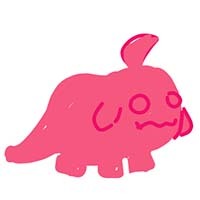 Prax is Vreeza's pet slime animal, and lives in a terrarium in their lab (although it temporarily lived in a smoothie cup in the fridge while they were getting that set up). It is very small and fits in the palm of a person's hand. It eats fruit. Prax was a gift from spaceDiscoverer's character Dr. Witski, who Vreeza talks to in an online chatroom sometimes and briefly met in person due to some shenanigans with portals.

Although they're both Vreeza's pets, Homare-chan and Prax don't frequently interact because Prax lives in a terrarium in the lab and Homare-chan isn't allowed in there because having a large and clumsy animal roam freely in the lab would be too dangerous even by Vreeza's standards.