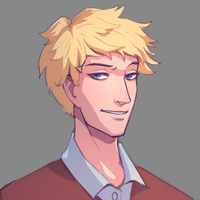 No character sheet yet—check back later!

There's nothing anyone hates more than a person who's a genius and who knows it. Titanio Calied, inventor extraordinaire and young founder of the Calied enterprise, is that sort of guy. He knows he's smarter than anyone he meets on a daily basis, and he carries himself like exactly the sort of person who could think and talk his way out of any situation: that is, with a quiet cockiness that he doesn't have to express for those around him to feel it.

Visionary, ingenious, and very proud of the fact that he has three books in print, Tanio is a smug nightmare in conversation, and a pesky rival to have, as rival inventor Aena Cerr has come to realise. He knows the ins and outs of human nature, seeing it as a system of cause-and-effect switches, and is occasionally not averse to manipulation.

Tanio has a reputation for eccentricity, thanks to his habit of sacrificing an appearance of normalcy for the most efficient solutions to everyday problems—a trait that serves him well as an inventor, not so much as an ordinary member of the public. He spends majority of his time working in his top-heavy home on Beacon Way, where their appliances are powered by a turbine on the roof and they bathe in water out of a repurposed boiler tank.

Beneath his enterprises and his mind games, Tanio is really just a man who wants to be a good person to those close to him, and often fumbles through his relationships, meaning well but not always knowing how to manage the balance between closeness and space.

Tanio began his life in the New Town, born to parents who could only just afford to fund his education. Before the New Town went in shambles thanks to a series of poorly-planned economic policies, he graduated from high school at sixteen, with honours that would nab him an easy entry into any vocation. Believing that it was his duty to use his abilities to change society for the better, he chose to further his studies as an engineer—then one of the most-frowned-upon vocations in Astra and one in bad need of a renewal.

For this he moved briefly to Swan's Cross, all the better because the New Town was foundering and almost unlivable at this point. Living with the school, he studied and formed connections among the local scientific community, making extensive plans to start an independent company immediately after graduation.

His plan was hampered by the Purging, an event that took place the year he graduated in which a handful of prominent research companies were found guilty of heresy and forcibly shut down, their leaders executed. Although the tables quickly turned on the diarchs, demand for scientific specialists remained scarce, and the first year of running Calied Co. proved rather barren.

Calied Co., while reputed in its own right for its various patents, became a front for the (technically illegal) flying machine project he decided to initiate in the wake of the Purging. Four years into the company's existence, he was approached by Ruthenia, daughter of two scientists whom he had cosied up to during his further education. Taking pity on her and seeing something special in her, he drew up a contract combining guardianship and employment, and took her in as both employee and legal ward.